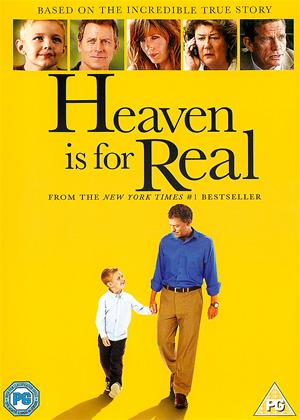 Reviews of Heaven Is for Real

Heaven Is for Real review by Michelle Sommerville - Cinema Paradiso

There was a time when religious movies ran abound. When Heaven was not a fairy-tale and the harsh world knew that peace was attainable. Then came the time when in order to talk about Jesus and Heaven, films needed to first focus on the Easter Bunny and Santa Claus. Thank the Lord that time has passed. The resurgence of Christian films brings a smile to my face and so does Heaven is for Real.

Colton Burpo is three years old when his stomach flu suddenly turns into appendicitis. His parents rush him to the hospital, and are given the heartbreaking news that complications gave their son little-to-no chance of survival. The parents pray, a miracle occurs, and Colton recovers. Four months later, he begins speaking of things and people he could not possibly know. He reveals the moments of his near death experience, and describes Heaven and seeing Jesus. His father, a Pastor at the local church, wants to believe his son, but finds the growing pressure from the community and arriving horde of media almost too much to process. Did Colton truly visit Heaven? Watch this movie and decide for yourself.

Rarely will you find a book that translates well into a film, but this film actually does. Firstly, the cast are amazing, with Greg Kinnear excellently playing the struggling father, and the adorable newcomer Connor Corum. Secondly, we all know it might not be factually correct. We don’t know what the afterlife will look like, and it has also been noted that there was no evidence reported that Colton was clinically dead during his surgery. However, it’s the point of the film, to bring about hope and individual religious discovery. The same could be said for Field of Dreams (1989). Nowhere in the Bible does it say that deceased baseball players will attend your field if you build one, but it was about hearing God and having the faith and trust in him to follow his commands, regardless of your temporary understanding.

In terms of the technical aspects, Heaven is for Real is creatively beautiful. The scenery is breathtaking, with the wide shots of the open farmland expanse and the bright colours of nature popping with intensity. The unique camera angles and visual effects work seamlessly, complementing the story.

Of course, a film like this will still have those that attack it for its religious message. Many reviews have commended the film for both its script and cast, while criticising it for how ‘preachy’ it was.

Whether you are a religious person or not, this movie is a must-see. It does not matter if what Colton – in real life – experienced was a true afterlife, but what his testimony stands for. It is a beautiful and heart-warming story that does not revolve around car chases or vampires, and has the ability to get important conversations started. With the recent line of Christian movies hitting the cinemas, now is a good time to gather the family and enjoy the flicks!