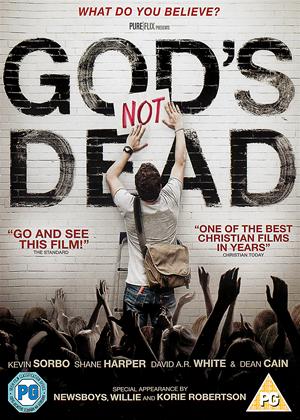 Watch it - God's Not Dead review by Swambi

I would substantiate the critic's review. The film is well made, well shot, has good music and a range of sub-plots and which sustains interest throughout. If you are an out and out atheist, don't bother, but otherwise the interaction and debate between Christian and atheist proposals is excellently presented, thought provoking and worth considering long-after you finish the film. Plenty of human interest, but personally I felt the last part of the film was the weakest, with a 'death-bed conversion' and a concert (ok if it meets your taste).

The question is Is God dead? - God's Not Dead review by IG

The premise of this movie is to ask the question is God dead in the context of a young Christian student having to go against his university professsor as he refuses to accept the premise that God is dead.

Generally well acted and if you are open minded will make you think.

Of course there are some stereotypes but please look past these to grapple with the issues.

Writing as a Christian believer myself I am afraid I have to say that this was a bad film in many ways. The characterisations were flat cartoon-like caricatures, the soap-opera-like slew of dramatic incident and relationship issues were completely unbelievable and the stereotypical Christian life-experience just did not ring true. When evaluating a film it will not do to judge it on its intentions, noble and well-meaning no doubt they were but on its artistic and dramatic integrity of which this film falls far short.

There is so much tub-thumping that one feels preached at and patronised as everything is spelt out so graphically: the atheist professor is depicted as a kind of Medieval Mystery Play devil while the believing student is very carefully portrayed as meek, extremely-well read and knowledgeable, a David and Goliath parallel. Amy is loneliness personified, the professor's partner, Mina, the downtrodden and persecuted angel-like figure; you also have the patient Pastor Dave and his jolly friend who embraces all frustration with a "God is good" and beaming smile. All these figures could be the stock conventional characters in a play like Everyman which little human depth. As the film is supposed to be real and convincing I am afraid it fails.

The already established relationships between the professor and his partner and that between Josh and his girlfriend seem to have had an impossible pre-history. The first relationship one would assume to have been sexual, (inconsistent behaviour with the saintly Mina) and the second one raises the question of whether there had been discussion of what Josh's faith means to him. Do I not understand American culture or would a professor's guests at a dinner party really all openly humiliate his partner; would a highly intellectual professor get so emotional in front of his class: would Mina (an exemplary Christian we are to believe) storm into her partner's place of work, rudely interrupt a conversation and blast a very personal matter in public? Why were was Pastor Dave so blase after the fatal traffic accident? I could go on.

There are many incidents themselves such as the repeated car failure that are so contrived and eventually become predictable,

The final scene where every Christian introduced in the film flocks to a Christian rock concert and are seen dancing in near ecstasy gives the impression that this is the zenith of Christian experience. Personally, I prefer a Bach cantata, poetry and the quietness of nature for spiritual uplift which seems a million miles from the depiction of Christian living in this film! It is very uncomfortable to have to give this film a low mark with its honest motives but this film, obviously not fantasy, has to meet the same standards of any other film and sadly this one is a long way behind.

The experienced Kevin Sorbo and newcomer Shane Harper face off in the most recent Christian-based film to hit the big screen, arguing the controversial question: Is God Dead? The film is a perfect mix of logic and emotion, that anyone and everyone will love.

The recent influx of Christian-based films and mini-series’ is a wonderful thing. Watching them not only gets people talking, but also shows how God’s thousand-year-old promises are still accessible to us today.

Josh Wheaton (Harper) does not know what he is in for when he signs up to the college philosophy course, run by Professor Radisson (Sorbo). The students are all offered an easy passing grade, if they simply write: ‘God is Dead’. Wheaton, a Christian, refuses. Radisson offers an opportunity for him to pass: prove God is not dead. Wheaton accepts, but struggles to find the right words. He knows God sent him there for this very reason. He cannot fail.

Sometimes it is hard to describe exactly why you love a movie, but others times, everything just works.

There are not many familiar faces in the cast, but I am sure we will be seeing many of them in leading roles in the future. Kevin Sorbo is not as we have seen him before. He is not a Greek hero. He does not show-off his rippling muscles. Instead, he plays the role of the antagonist perfectly, not only portraying a human obstacle the hero must overcome, but also allowing his own character to come to life. Shane Harper brilliantly takes on the pressure-filled leading role. Coming from a mainly dancing background, it is amazing to see the depth of acting-emotion he has – though he still has room for improvement. Special guest stars such as Willie and Korie Robertson, from Duck Dynasty also bring a more light-hearted feel to the film.

Christian music has been growing in popularity over the years, and the Christian pop-rock band Newsboys – whose songs feature in the film – are sure to gain more fans with their inspiring music.

Overall, the film gives a very important lesson to learn. Colleges and universities all over the world claim to want open-mindedness, but criticise and taunt when a Christian walks in. There are legitimate arguments proving God’s existence, and so-called intellectuals need to hear it. Films like these get people talking about Christianity and doing the research for themselves.

As can be expected, most online reviews are very unfavourable. Criticisms range from its general faith-based story, to how preachy it was, and even the camera techniques. Despite this, audiences are quickly filling the seats and proclaiming their approval.

Not everything in this film is perfect – such as their stand on evolution and the big bang theory – so it’s important to watch the film, but then go out and read the Bible. This film was shot in a total of twenty days and has already gained over thirty-times its production budget. There is a definite market for Christian-based films and it seems, for the meantime at least, they are here to stay.