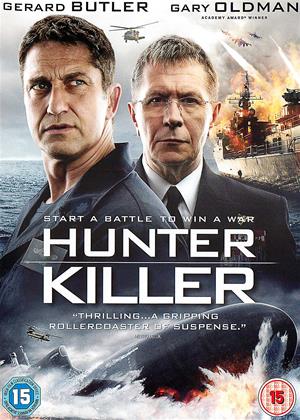 Action in all directions. - Hunter Killer review by PB

There is a submarine layer, a spec ops layer and a geo political layer.

It is exciting, suspenseful, has great action, impressive and believable CGI and no unnecessary sub plots.

If you want a pacy, action movie that is visually impressive and well acted and directed, try Hunter Killer, I don't think you will be disappointed, I loved it.

One of the best and entertaining action films in many years. Brilliant acting by all the cast, a good story line and well produced and directed. This is a film I would willingly watch again. Noticeable that it has received better reviews by audiences and the public compared with so called film critics! Yes, there is a fair amount of cgi in the film but most of this is done far better and more professionally than the usual Hollywood offerings.

I like Gerard Butler and Michael Nyqvist (John Wick 1) and it looked good from the trailers and reviews.

It was also another chance to test our new system and wow! The explosions were powerful with very deep bass.

The film was quite good although I thought a few sequences were a little far-fetched as in the part where the submarine is scraping the bottom and sides of a gorge whilst trying to miss the underwater sensors.

Apart from that, it was entertaining and had some good twists.

Being ex Royal Navy this film brought back memories although I was not a submariner. Enjoyed the film and so did my partner.

I really liked this film - OK it is in the same vein as Hunt For Red October as a submarine-based film but in this film (as in others) you realise the pressures of command that these submarine captains are under - not through leadership of men but the power that they hold in the capability of starting a conflict that will have no winners, and they are asked to play politics as well, dealing with people who drive a desk all day and call it pressure. Submarines are not as un-manoeuvrable as some will have you believe, just slow and steady when required and where everyone has to think in more than 2 dimensions. My one major gripe about the film was the unbelievably simplified scenario that the SEAL team just walked into a Russian naval base. I would recommend this film

Very disappointed in this film in general and I have loved Gerard Butler in almost everything he has done.

Smacked of Hunt for Red October [which I snored thro at the cinema].

Maybe its just the subject matter/genre of film - possibly just not for me.

Do we really need another cold war submarine movie? The film is based on a 2012 book and adds nothing new to the genre. This time Gerard Butler is the captain, there’s skulduggery beneath the Arctic waves and his sub is sent in to find out what’s going on. You’ll get a laugh after five minutes when he’s hunting with bow and arrow in the high Bulgarian mountains and the caption says he’s in Scotland. All the usual tropes and chain-of-command technical dialogue is present and correct, as are the usual cgi shots of the sub skimming past the camera through murky waters. Will the Russian torpedoes sink Gerard? You get one guess.

A second even less interesting strand of plot has Gary Oldman playing a warmongering politician in Pentagon discussions about what to do. Two clichéd plots in one film not enough? Okay, let’s add in a rogue Russian general with weapons at his disposal. To say nothing of some happy-clapping at the end.

That said, this is a well-paced and never-boring film. Even the clichéd stuff has a cosy familiarity. If only Gerard wasn’t cooped up in his control room with nothing to do to flex his muscles, because there’s a third strand of plot involving a Black Ops raid on the general’s base, and this one does pack some excitement. Brit Toby Stephens is the leader but it should have been Gerard. As he’s also the film’s producer it was maybe too much for him. As he says on the DVD Xtras, that’s the part you’d expect him to play.

Overall the film gives a two-hour easy watch and the DVD Xtras are also worth catching. Gerard is always an enthusiastic interviewee and director Donovan Marsh delivers an interesting commentary for cinema buffs telling us how it was all done.

There's not much wrong with this film. It's fast paced, well acted and watchable. it's just that submarine warfare, nuclear threats, cold war, macho heroics etc is all, well, a bit passé. It needed some twists and some imagination to raise it a level.

Gerard Butler can be a suitable action actor for the right project. Throw him into a film with lots of battles, gunfire, and explosions and he’ll bring out that inner beast. But for the submarine action picture Hunter Killer, it seems like some ordered a vanilla Butler. No emotional responses, no gritting of his teeth, and no harsh shouting. This isn’t even a brooding Butler that holds a quiet dignity. Here he stands in a role that requires him to be calm and stoic with hardly a trace of emotion.

I can’t blame Butler though. Hunter Killer is a film that does so little for intrigue in its lukewarm attempt to replicate the tunnel-vision appeal of a Tom Clancy novel. He plays Captain Joe Glass, a man called in to help solve a tough political situation of Americans and Russians on the brink of starting a war with a missing submarine. Glass is just the man for the job considering his stick-to-the-script methods as opposed to feuding arguments between Rear Admiral John Fisk (Common) and Chairman of the Joint Chiefs of Staff Charles Donnegan (Gary Oldman) on how to proceed. Oldman thankfully brings some heated words to an otherwise dreary military drama, having the honor of declaring that those in charge have not only started a war but lost it as well.

It’s sad, really, that Butler never gets to break out into a similar bit of hysterics, perhaps out of fears of him replicating his more familiar persona from the likes of 300 or Olympus Has Fallen. But why would you do that? The Hunt for the Red October, an obvious inspiration, was more notable because of the compelling performances and the tense atmosphere. And since this type of story is never given all that much glamour past the basic-level blockbuster theatrics of an underwhelming epic score, shaky camera work, and coordinated dialogue, the actors really have to carry the picture. To be fair, Butler does have a certain leadership quality but it’s vastly understated here. Again, why? What is the point in trying to stage a submarine drama with such slow and snoozing dignity when there have been dozens of these types of pictures prior with little new?

This is a workhorse picture where trying to judge its appeal is like trying to judge the entertainment value of a pen. It performs more or less the way it was designed. It stages some submarine action with is serviceable surface. There’s political intrigue that does at the very least keep the plot moving at a progressive pace. There are some gunfights for an extraction, staged with little hints of great stunt work and grit. But aside from some solid special effects and camera work, there’s little else to be invested in.

Hunter Killer did have a theatrical debut but it’s yet another vanilla entry in the military action genre that will soon be wedged between other generic titles that will soon be forgotten. I’ll admit there is a competency to this type of film that does put the effort in the production to stage a believable tale of politics, submarines, soldiers, and combat. But like a fine-looking car without any gas, it does little more than look pretty as it chugs along on fumes for energy.