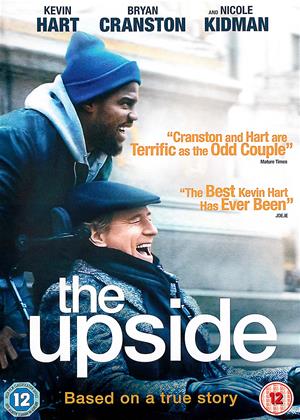 Reviews (2) of The Upside

Don't go anywhere near it!! - The Upside review by MP

Looks awful from the trailer.Typical Hollywood rehash and ruination of the original French film called Untouchable which is absolutely brilliant.

Worth a watch, enjoyable - The Upside review by FP

Its a kind of film you would watch on a Sunday afternoon, a feel good film and a good reminder to appreciate and to live life. We enjoyed it, worth a watch.

The Upside had been held back from a theatrical debut for two years. I initially thought it was due to the Weinstein controversy that set it back but upon seeing the film I fear it may have been more than that. It’s an abysmal dramedy pairing that brings its laughs and sombers so stock and prepackaged that the artificiality leads to a more bitter formula. This ends up turning the American adaptation of the French true-story film The Intouchables into the watered-down version one expects but doesn’t hope for with these types of stories.

As with previous Kevin Hart buddy pictures, this is a film that pushes two decent comedic forces together but doesn’t give them much to do past the expected trope tracks. Cranston is a wealthy figure of New York, residing in a top-floor penthouse with all manner of expensive art and opera playing throughout the halls. What he doesn’t have is the use of his body from the neck down after a paragliding accident turned him into a paraplegic. And with the loss of his wife, he fears his time is up, ignoring his lovely assistant played by Nicole Kidman and rejecting all the touch-feely applicants to be his new life auxiliary.

In walks Kevin Hart, a former thief out on parole trying to prove himself to his ex-wife and son by finding a job. Hart thinks he’s applying for a janitor position at Cranston’s building and unwittingly displays his sass and gumption that impresses Cranston. Thus begins the odd friendship of a cultured elite and an underqualified deadbeat dad trying to reform his ways. They offer the expected trades of fun and focus, where Hart will learn about finding his business niche and Cranston learn to open up and enjoy life more.

While I did expect The Upside to go for the lightest of comedy and the most mellow of drama, I didn’t expect it to be so sloppy about it. So much is set up and so little of it pays off in the relationship of Hart and Cranston. Throughout the picture, Hart continues to find what could make for a great business idea but his ultimate idea feels like such an afterthought for how little it is developed. One would think it would be opera by his newfound appreciation or painting for managing to sell a piece but these aspects ultimately go nowhere. Cranston’s pathos is one that could be skillfully told but instead comes packaged in the tired preset of blurry dream flashbacks.

But by far the most distracting is the filmmaking itself. I was astonished to see several sequences where the camera is unnecessarily bumped and shaken for nothing-scenes, feeling more like mistakes than placing us inside the drama. The editing is awkwardly wonky, where several cuts will be made for the same shot, most occurring during a dance scene as though Kidman’s dancing was cut around to make her look better than whatever was shot. And you gotta love how all-over-the-place that climax feels which becomes so scattershot it starts randomly cutting to the more expensive footage to have a grander closure.

I’m sure The Upside has an optimistic tone just strong enough for the less attentive viewer to excuse the film’s many, many shortcomings. But I guess it also comes down to how much you can laugh about Kevin Hart being grossed out by a penis for five long minutes, where the mere mention of the word penis is part of the joke. There’s only so many jokes you can make about changing a catheter and only so much a dramedy like this can muster when the autopilot is switched on for this bafflingly bad buddy picture.