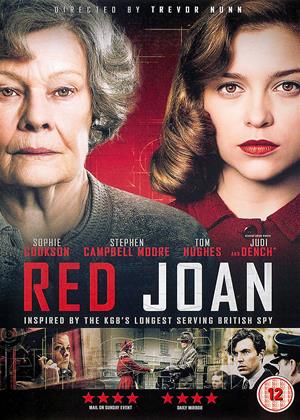 Synopsis:
Joan Stanley (Judi Dench) lives in contented retirement until her tranquil life is suddenly disrupted. The dark secrets she's been hiding since her university days have been uncovered by M15. She finds herself in their custody, accused of providing intelligence to the KGB. Cut to 1938 where Joan is a promising physics student at Cambridge University. There she falls for a young communist named Leo Galich (Tom Hughes) and through him, begins to see the world in a new light. After graduation, Joan secures a job in a weapons research facility where she comes to the realisation that the world is on the brink of nuclear disaster.
Now Joan is forced to answer an impossible question: exactly what price would she pay for peace?
Actors:
Judi Dench, Sophie Cookson, Stephen Campbell Moore, Nina Sosanya, Laurence Spellman, Nicola Sloane, Tereza Srbová, Freddie Gaminara, Raj Swamy, Tom Hughes, Adrian Wheeler, Ben Miles, Lulu Meissner, Phillip Langhorne, Mike Sykes, Ed Birch, Debbie Chazen, Robin Soans, Raymond Coulthard, Simon Ludders
Directors:
Trevor Nunn
Producers:
David Parfitt
Writers:
Lindsay Shapero, Jennie Rooney
Studio:
Lionsgate Films
Genres:
Drama, Thrillers

Very pc and untrue telling of a much more interesting true story, based on a historical novel - Red Joan review by PV

This film made me angry? Why? Well because it's based on a true story - though I blame the author of the novel, rather than the film-makers. The novelist simply took a true story, and sort-of fictionalised it (so basically stole everything, no imagination needed), poshed up the story thereby making it into a feminist hero tale too - it is so easy and lazy and wrong. Just like that awful film/novel 'Room' - just steal a news story and write it up. Tss.

The TRUE story is far better - the lady who was NOT a 1st class Cambridge physics graduate but a mere secretary who was a KGB agent and then esposed in 1999 in the London boring-bungalow suburb of Bexleyheath: https://en.wikipedia.org/wiki/Melita_Norwood

BUT of course, making her a proto-feminist pioneer and a 1st class physics graduate at Cambridge (where the lawyer authoress went) ticks all the pc boxes and as per usual in modern movies, all women shown are 'strong' and WAY too modern in looks, behaviour, speech and attitudes for the time. IN REALITY hardly ANY studying physics at university are women - due to innate reasons, it seems, not sexist barriers.

It's all so-so and Dench phones it in as per usual - the emotional love affair stuff is ALL fictional; in real life the woman was happily married. All to satisfy the author's female readership base, I expect. In real life, the spy's dad was a leftwing Latvian immigrant and her husband a Russian immigrant, and she was suspected in 1965 but M15 did not want to show their hand, then exposed in 1999 after a Russian defector came here in the early 90s and published a book naming her in 1999. That is the truth. NO head of M15 spy nonsense in real life. Pure fiction.

SO, a very irritating movie indeed, despite being a so-so story, and the actor (Hughes) who plays Leo is excellent at least.

BUT I'd be MUCH more interested in a TRUE film or a documentary about Melita Norwood, the woman on whose life this pc box-ticking movie is based.

6 out of 14 members found this review helpful.

Another Strand of how many Cambridge Spies were there? - Red Joan review by AA

Not aware of the story that the film is based on but if there is any truth in it then it yet another chapter of how many spies were there in Cambridge during the war and the years thereafter!  As a movie I enjoyed it and a follow up would be why the LGB centred so many resources on Cambridge!  What did they really know?

I liked this movie but it led to big arguments among family and friends as to the morals it brought up. I won't say why as it is a spoiler but interesting how views differ.

I have only one word for this film - BORING! Don’t bother with it! It has superb acting by Judi Dench and Ben Miles but apart from that I am just so so glad we didn’t go to the cinema to watch it. I fell asleep after half an hour and woke to see the best bit which is when Joan is interviewed outside her house, by the press. Sorry if that spoils it for other people but it is just so not worth watching.

Another great performance of Judy Dench.Story of love,loyalty,choices and concience.Is a friend really a genuine one.Who is your lover?A woman,and a clever one in a mens world .

A lot of people are not very fond of see-sawing back and forth between the present and the past and whilst it was well-done, one's interest was punctuated by this continuos switching back and forth. The acting was quite superb and turned this docudrama from average to very good. However, I would have preferred it to be made as a story starting at the beginning and brought to the present day chronologically. it would have been very engaging.. By bringing it forward and having Red Joan interrogated repeatedly did nothing to advance the story.

I remember Red Joan when the news broke, and the newspapers dropped it as quickly as it had begun. Red Joan had taken steps to prevent a war for fifty years and, even today, the megolomaniacs hesitate when they think of the consequences.