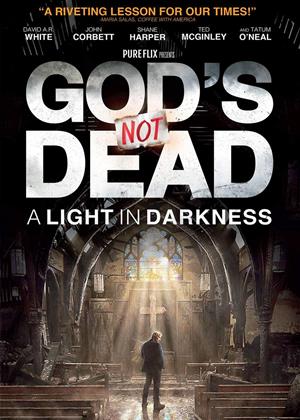 Rent other films like God's Not Dead: A Light in Darkness

Not released
The Identical

Not released
Video Games: The Movie

Reviews of God's Not Dead: A Light in Darkness

Oh, what a capper this film is to the so-flawed-its-funny Christian propaganda that is God’s Not Dead. It aims to be bigger, blunter, and crazier with its tales victimized Christians, harassed and cast aside by that pesky separation of church and state. And there’s an explosion! The war on Christians goes to a new level of lunacy and it’s about as par for this crazy course as it gets.

The current case against Christians is the presence of a church on a university campus, keeping with the theme of education because I guess it makes the film more appealing to young people. The series’ returning character of Reverand David Hill (David A. R. White) runs this church and doesn’t want to see it torn down to be replaced with more school-related buildings. This may seem like a simpler case of trying to save a building, much less messy and stupid a premise than arguing for talking about Jesus in school or trying to best an evil atheist professor. But, no, the film feels the need to proclaim itself as more of a spiritual argument than one about preserving the church as more of a landmark. Because no Christian is ever wrong in the world of God’s Not Dead. Remember, they’re the victims here.

In case you’re confused that David is the good guy, they turn his plight up to 11 when the church is attacked and there’s an explosion in the basement, which kills David’s best friend Jude. The fire was an accident caused by a protesting student that just wanted to toss a brick at a window and ended up murdering someone. I guess the kid better start confessing because where else than a Christian propaganda film would that be more welcome. Don’t worry, kid; the good Christians will forgive you. So long as you let them keep their church on a college campus and allow prayer in the classroom. Speak against it and they’ll sue you.

Trying to talk some sense into Dave is his attorney brother Pearce (John Corbett). Of course, Dave doesn’t listen and continues to fight. After all, Dave’s not wrong. He has God on his side and he’s always right. But then something unique happens. After much frustration, Dave realizes that, hey, this fight for the church isn’t worth all this fighting, protesting, and headaches. And so he decides to let the church be torn down and build a new one off the college campus. What a great conclusion. Maybe you should’ve thought of that from the start before your best friend ended up dead. Oh, well. Nobody’s perfect. Well, except God.

The (hopefully) final God’s Not Dead is strangely the weakest one for having higher stakes and a tangible goal. It’s not as over-the-top insane as the previous entries, settling into the stuffy boredom of two dull-as-dishwater brothers reconnecting around their catalog-friendly home. The most excitement they have is cutting down a tree in the backyard, spending the rest of their time looking at old photos, chatting the past, and arguing with each other about the case. Aside from a brief mention of a college student spouting what all Christian adults want to hear, that Jesus was the ultimate social justice warrior as if that was somehow some slam against SJW democrats, nothing as ludicrous happens in this scenario. Even the montage of bickering news commentators can’t fulfill that goofy quota properly.

God may not be dead but I’d have to imagine he’s certainly bored with this film that more mills about a pointless courtroom drama than deeply explores faith. But, hey, there was an explosion and a death! You don’t see that too often in these movies.