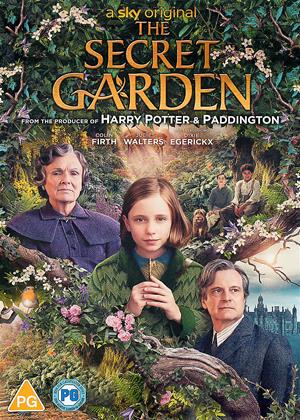 Reviews (8) of The Secret Garden

Loved it - The Secret Garden review by LH

I’m an adult. Thought this film was magical. Not that childish and a great watch for adults too. Very true to the original book, only a little CGI. Some top actors and a beautiful garden/outdoor scenes. Perfect feel-good film for lockdown. Also, great inspiration for anyone coming back from illness. Lovely.

This whole film felt very lazy. Was it made for 3D? Lots of effects felt like they were meant to be seen that way? Birds and butterflies zooming into the camera.

Mary is not a sympathetic character, the book is written that way but she did not win me round which I think she should have done. I wasn't even rooting for Colin and his recovery. The only thing I invested in was the dog!

I'm a fan of Julie Walters but nothing for her to do here I'm afraid, even less for Colin Firth. We'd been looking forward to seeing this, kind of wish we hadn't bothered.

Loved this film! It had some exquisite imagery - the scenes when the garden was blooming or dying in response to emotions were so well done. Colin Firth put in an excellent performance as the father, as did Julie Walters as Mrs. Medlock, and there was not one thing that didn't sing in this script and in this film. Very highly recommended!

In spite of a stellar cast this just didn't evoke the atmostphere of the book. Basically the garden wasn't right, it need to be an english country garden with delicate spring flowers and roses not a tropical garden. There are of course plenty of tropical style gardens in the UK but not really in keeping with a place on the yorkshire moors. Disappointing.

This new adaptation of the popular children's novel by Frances Hodgson Burnett is no doubt a big production and the CGI use is extensive but the story has been played around with too much and the essence of it lost. It also does some very weird things that make no sense even when the fantastical elements have been ramped up considerably. For reasons that I cannot fathom the setting has been moved from Edwardian England to the late 1940s where spoilt 10 year old Mary (Dixie Egerickx) is living in India. Her parents die and she is sent to live with her grumpy Uncle (Colin Firth) in a gigantic mansion on the Yorkshire moors. Under the control of the strict housekeeper Mrs Medlock (Julie Walters - very underused) she explores the house and grounds finding a walled off garden, a sick cousin, a dog and a sudden flash of niceness! Bringing these all together to bring happiness to the maudlin household. Now here's the problem, the titular garden is a veritable Amazon jungle and huge. It's like Mary finds herself in a Jumanji film. The sickly cousin Colin (Edan Hayhurst) is too much a horrible kid and redemption seems wasted on him. The film has upped the magical elements of the story to the extent you're never sure if you're watching a fantasy film, a drama or a hybrid. You can never quite believe that somewhere near to the bleak, windswept house you see early on there's a veritable paradise, I was expecting lions etc to be living in it! A rather pointless new version that doesn't work, takes forever to get going and then is way over the top. Stick to the 1993 version it was much better.

Wonderful Film, So enjoyable with 3 young/new actors , and a stellar cast, keep the hankies nearby. Colin

What a delightful film. I thoroughly enjoyed it and it made a very pleasant change from some of the harrowing films that are being made now!!

Having never read the book or particularly being able to remember the previous film and television versions The Secret Garden comes to me with no baggage attached. I was not expecting something I had seen or read in a cherished past. So often with cherished classic adaptations this is the film’s biggest weakness, and some would say its strength.

The writer and director could have just made a straight down the middle modern version of any of the other versions or indeed the source novel but much to their credit they have put a spin on it that they hope will belong to them. Their vision if you like. Unfortunately, this will alienate probably a good half of the audience before Colin Firth reveals his ‘hunch back’. For anyone like me it does not hit us over the head with the hammer of outrage.

The story is fairly simple and not particularly original, if you boil off the outer coatings it is unlikable character learns that there is more to life than being spoiled and that she was always loved and becomes likeable, it is how we get there that makes the film.

To my eyes and admittedly simple mind we are hand-held throughout the story by Mary, very well played by Dixie Egerickx who should have a long career in entertainment ahead of her if she so chooses, and Mary is a 10-year-old child, an unreliable narrator to wear out a phrase that is in danger of falling to pieces. I assumed what you see on the screen is her recollection, even the dramatic finale, so the robin, enormous plants and foliage, the garden seemingly acres and acres in size and apparently somewhere around a twenty-mile walk from the manor all come from the rich imagination of a girl we are shown loves to tell anybody she meets stories. The events happened, but not in that way. I settled into this way of viewing the film early on and so I enjoyed what I viewed without fussing over the anomalies.

If you bookend the children with Colin Firth and Julie Walters you have sound, strong foundations but as mentioned before Egerickx is an extraordinarily talented young actor and unfortunately outshines her supporting youthful actors, Amir Wilson and Edan Hayhurst, they try their best but there is tiny acting colossus striding about in front of them. To be fair there is nothing wrong with either performance but their characters are not given a lot to do other than get the story to a point needed.

The CGI work of the colourful garden fits right in with the magical feel of the story that surprisingly is grounded in death and grief and points out not too subtly that only nurturing and caring causes anything to thrive. This is okay though as surely much of the audience will be parents and children I would think. So simplifying the original story making it bright with a strong and clear happy ending fits right in there.

The Secret Garden is a much-loved classic and this version is a more modern take with characters updated, removed, changed to fit in with the vision. It does not make it a bad version simply different. As it is this Secret Garden sits well as a family-orientated film that tries to show grief, loss, fear and redemption without making it terrifying or depressing for young viewers. Sometimes films are not made for those looking nostalgically over their shoulders and old cynical people like me.

The vision of the cinematography is colourful and evocative at the right times, dark and menacing when it needs to be, the score suits what is in front of you and the acting is good enough for any film and in some places superb.

The Secret Garden is not going to take your breath away and stay with you for the weeks and months to come but it does what it is meant to do and in general does it very well.