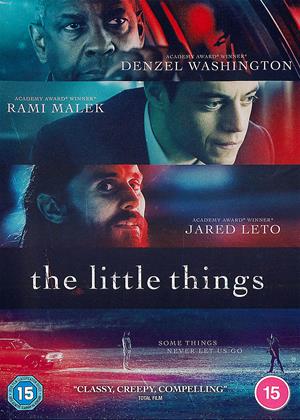 Reviews (2) of The Little Things

Not up to par - The Little Things review by CS

Was really looking forward to this but not Densel's usual offering, was expecting more. Good enough story line with suspense and tension, but lacking in some form. Shame, as I usually give his movies 5 stars but this one is only a 2 and a half really.

Tired and disappointing - The Little Things review by Alphaville

Cop Denzel Washington is on the trail of a serial killer in LA. It’s got to be good, right? Wrong. Everything about this film is dull – the script, the direction, the soundtrack, even Denzel’s performance. His partner Remi Malek’s mannered performance doesn’t help, while even chief suspect Jared Leto succumbs to the general malaise. When the three of them exchange meaningful looks it’s more laughable than tense. Perhaps all concerned should have had a good sleep and started all over again.

The Little Things is such a slow-burn of a detective drama that it burns itself out of any intensity. It’s a film that takes its sweet time trying to weave the personal darkness and introspection of a murder case, where two unlikely detectives track a slippery killer. But in trying to let the shadowy atmosphere coat its investigative exterior, it spends far too much time watching the cigarette burn than to take a drag one would expect from a gritty thriller set in the 1990s.

It’s a big disappointment considering the talents involved. Denzel Washington portrays the aged Kern County Deputy Sheriff Joe "Deke" Deacon, still haunted by the past of murder investigations where the bodies still visit him in nightmares. He finds himself dealing with a serial killer case and has to work with the more collected LAPD Detective Jim "Jimmy" Baxter, played by a calm and calculated Rami Malek.

The two are somewhat mismatched in that Deke gets dirty while Jimmy seems strictly by the book. They don’t clash much, however, as they’re too focused on the job. There’s a moment that solidifies this when Jimmy asks if this type of investigation seems new for Deke. Deke only asks if their job is to still catch the bad guy and that the job hasn’t changed if that’s the case. And for most of the film, they don’t seem to clash much, maybe passively bickering over a dry insult or choice in radio stations.

Their lead suspect is Albert, an aloof bearded man who finds himself more fascinated than frightened by the detectives. He’s played by Jared Leto in a surprisingly subtle performance of a man who likes to toy with his prey but never make things too obvious. He plays on their suspicions and insecurities, willing and eager for them to get closer. Interrogations don’t deter him either, becoming surprised and intrigued when Deke will explode on him.

The film’s title comes from Deke’s focus on micromanaging cases and investigations, often saying this more than once so we don’t forget it. Echoing the detail-oriented approach of Washington’s previous action performance of The Equalizer, Deke analyzes everything when on the job, including looking over garbage. Perhaps something will reveal itself in the pizza boxes and tossed beer cans of the suspect’s rubbish? Of course, it will. Deke has to make some return from defeat. By that pendulum swing, Jimmy must also have a fall from grace to realize the job isn’t so clear-cut as he thought.

The Little Things is just too quiet for its own good, playing more like a low-rent season of True Detective. The somber approach seems less dark for the subject matter of serial killers and police corruption and more ambient in the reflective nature, as though those who break the law are only silently disturbed by their wrong-doings. The soundtrack bolsters this off-tone as well, making the whole film seem far too timid. This is best seen in a stakeout car chase where light piano makes this following-of-a-killer scene far less impactful. This film is so far asleep it borders on sleepy, considering how far Denzel and Rami spend the movie tightlipped and dreary-eyed while Leto lumbers along with his head in the clouds. It’s the little things that make The Little Things such an insignificant movie.