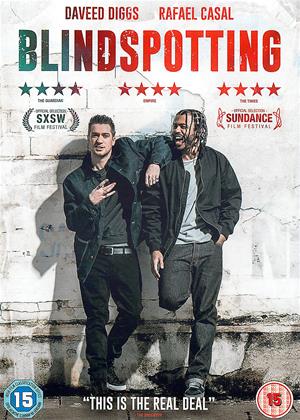 Just seen Black Klansman, up for all awards etc. Think this is way better film. Daveed Diggs is very credible. Actually can go with his flow. He states the case with credibility, whereas Spike cannot quite get rid of the big chip on shoulder thing. Is very obvious where he coming from.

This film does not make bold statement, just gives a cameo of how it is for this one guy in Oakland.

There’s a moment of great poetry and drama within Blindspotting that many will refer to as the rapping scene. Everything in the film builds to this heated point of lyrical grace and passion; the fear of guns, the corruption of cops, the gentrification of the city, the racial divide, and the desire to do good versus the anxieties of survival. The film is not about rapping nor is strictly about a police brutality. It encompasses an intriguing aspect of culture that turns men into heated time-bombs of aggression, struggling to keep their cool for what little may be left.

Daveed Diggs plays Collin, a convicted felon sentenced to serve his time at a halfway house in Oakland. He is mere days away from having finished his time and things are looking promising. He has a steady job with a moving company, working everyday in a truck with his white friend Miles (Rafael Casal). One night while driving home alone, Collin witnesses a suspect fleeing from the police. One cop decides to stop chasing and fires five shots into the suspect, killing him in the street. And Collin does nothing, shocked and fearful, but driven only to keep on driving and mind his own businesses. He’s already been in trouble with the law and wants to keep his head low.

But there is so much working against Collin that he can’t simply stay low and keep his mouth shut, no matter how much he wants to. Nightmares of his conviction trial haunt him with visions of judging eyes and bullets. He doesn’t think too much of his friend Miles buying an illegal gun, just desiring not to be around him when he has it out. But guns only lead down dangerous paths that could take his best friend in his current state of frustrations at home and within the city where he always feels out of place, both among the hipsters crowding Oakland and the black people that find his natural ghetto speak to be an act. The pot can only boil so long before it explodes into violence. This is true for both Collin and Miles, letting only so much slide before they can’t help themselves to go down in flames.

But there’s an odd sweetness in this somber realization. Most of the film finds Collin with a life that seems frantic but warm. He has an ex he still isn’t over, a mom who pesters him about finding a place to live, moving clients who are quirky, and a salon of charming stylists that present the film’s funniest showdown and cutaway gag. These moments feel genuine so that when things get heavy, when violence seems to be the only means of justice and making one’s voice heard, we remember and they remember the community they have, small though it may be.

Blindspotting features the debut direction of Carlos López Estrada, having plenty of experience in music video and theater and it seems as though he brings all these talents into staging this engaging and tough drama. Collin’s nightmare of his trial is brilliantly staged with rap lyrics, stark lighting, tilted cameras, and distorted footage techniques that could easily fit into a music video. The aforementioned rap scene is a confrontation and rant so exquisite in its lyrics, delivery, and staging that it could pass for an updated scene from a shakespearean play. And in these heated times where there always seems to be a distance, a plight, a gun, and hatred, there’s oddly sobering sensation to a film where a black man and a white man try to become bigger than the system around them, choosing not to pull the trigger when given the option. It’s not easy but good friends pull you back from the brink and so does Blindspotting, raw enough to be important but human enough to be inspiring.