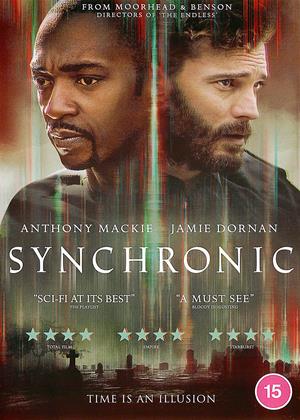 Synchronic has more ideas than a summer's worth of action films, however, it is unfocused and fails to harness the seriously interesting ideas that run throughout its story. Time is a construct, and two paramedics work to unravel a mystery concerning a legal high called Synchronic that gives us a new perspective of experiencing time as a non-linear. It's a shame that the workings of the plot are lumpy and at times difficult to understand the emotional logic. I enjoyed bits but ultimately, it felt frustrating and baggy. It needed a few more drafts to give it more oomph. There was so many ideas vying for attention that some aspects felt rushed and neglected.

Give me noble failures like this any day though compared to the airheaded reboots, remakes and dead sequels.

Benson and Moorhead’s best film yet, with the added bonus that they’re not acting in it as well as writing and directing it, but it still has all the faults of their previous work. For half the film we’re subjected to disjointed scenes of two paramedics (Anthony Mackie and Jamie Dornan) dealing with the effects of the drug of the title. Then a sci-fi element kicks in and things become more interesting as Mackie himself explores the drug’s effect. Dornan, meanwhile, is wasted in a thankless part as his moaning mate.

It’s all nonsense, of course, and becomes increasingly so. To give away the silly sci-fi premise would be a spoiler (NB Avoid spoiler-heavy Cinema Paradiso review before viewing), but at least the film’s second half becomes more engaging and less wearing to watch than the first half. At the end, there’s even some emotional engagement with the characters, which is unusual in Benson/Moorhead films. A thrilling score, featured heavily in the excellent trailer, only serves to expose the film’s ridiculous premise more.

Having read reviews if this film, we didn't expect an Oscar winner. The movie held our interest most of the time, and the strange fantasy element was fun with some tense moments toward the conclusion. Dirnan dies a good American accent! I never git the feel of New Orleans, a city I know well.

A ridiculous, clichéd time travel thriller that is slow, laborious, utterly daft and a waste of your time. Anthony Mackie and Jamie Dornan play two street tired paramedics who identify that a new synthetic drug hitting the streets of Ne Orleans is causing horrific deaths and injuries with those silly enough to take it. Dying of cancer Mackie discovers the drug takes you back in time for seven minutes and when Dornan's daughter goes missing after a try of the drug good ol' Anthony, after several attempts, heads back to find her. Yes it's as silly as it sounds. A waste of talent and time. I've given up the 100 or so minutes of my life here so you don't have to!

Directors Justin Benson and Aaron Moorhead have done an astounding job with mind-bending sci-fi on a budget as with their unique found-footage picture Resolution and their major twist of cult picture The Endless. It is for this reason why Synchronic is a mild disappointment in that it never feels as bound by that same energy. That being said, it still has all the wild and creative ideas the directors have for playing with the concept of time amid personal struggles.

The story concerns a mysterious drug going by the name Synchronic. Those who take the pill with the mysterious insignia will experience not just an out-of-body experience but an out-of-time trip as well. A trip that will turn deadly. Tracking this development are New Orleans paramedics Dennis Dannelly (Jamie Dornan) and Steve Denube (Anthony Mackie). They can’t quite explain the odd manner in which they discover victims with either unorthodox fatal injuries or uncommon broken limbs. But when the two discover that Dennis’s teenage daughter may have dealt in this stuff amid her disappearance, the investigation will need to speed up.

For Steve, his time is running out. He discovers a tumor that is terminal and realizes his life may be over soon. Trying to find out what’s going on with Synchronic, he takes the drug himself and makes a miraculous discovery. The pills can temporarily transport someone back to a random point in time. He begins a series of experiments to better determine the rules of where you travel, what you can bring back, and what stays in the past. While he continues to document and lose hope, Dennis’s relationship with his wife strains further, fearing the worst for his marriage.

Synchronic spends a bit too much time trying to explain the mechanics of the drug. At first, it’s explained by a scientist who gives the explanation for how the drug makes our mind witness time differently. My initial perception at this point was that the victims of the drug were merely hallucinating moments of the past and unexpectedly stumbling into death but that mystery would be too easily solved. It seems far more intriguing when the victims didn’t just mindlessly stumble into suicide but were attacked by extinct snakes and inexplicably burst into flames. The rules of the time-travel drug are still fairly loose where even Steve can’t plan out everything exactly, leading to some disastrous consequences.

The mood of this film is perfectly suited to be dark and brooding with a looming synth soundtrack and sinister fears bubbling up within the characters. Steve feels believable thru Mackie’s performance as a man frustrated with how little he can accomplish yet still blunt enough to admit during his film trials that time-travel sucks. I also appreciated how Dannis’s marital problems felt more real for the distancing growing slowly rather than just a montage of leaving rooms with glares.

The special effects are rendered rather simply though given much thought in their placement. On Steve’s first travel through time, he watches as his living room slowly morphs into a swamp, the couch unexpectedly dropping beneath his feet as it fades out of view. The travels through time jump all around the place as well, from the racist 20th century to the brutal Civil War. Some of it’s a bit too simplistic, as when he initially ventures to the prehistoric era to share a fire with a neanderthal, but the range of times covered is quite remarkable.

Synchronic plays around with its concept enough, yet never loses sight of the characters as well. It leads to some fine performances and a stirring sci-fi tale with a detective bent. It never overwhelms and yet still feels a tad too commercial given the directors and their ability to be craft strong stories on small budgets with no big names. It is still pleasing, however, that a lot of the more intriguing ideas remain even with a higher budget and more notable actors.