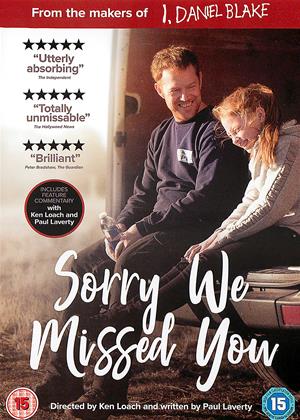 Reviews (11) of Sorry We Missed You

Please stop, Ken - Sorry We Missed You review by Alphaville

Yet another joyous, life-enhancing, cinematic Loach extravaganza. Joke! Yet another class-warrior rant against the system in the guise of another one-dimensional depiction of the struggling British working class. It’s like being locked in a room with Jeremy Corbyn. This time our Ken’s railing against the gig economy. He’s perfectly entitled to dramatize this, of course, but no one should be inveigled into watching it without first being made to sit through the trailer. This is supposed to be a film, Ken, not a miserable TV drama. Even the dog has only three legs. Best thing about it? At least he keeps the camera firm without jiggling it around.

6 out of 22 members found this review helpful.

If you know Ken Loach films, you know what to expect. Unknown actors perfectly cast to play the roles. This gives the film the necessary relatability you don’t really see in cinema enough. The subject matter is of course given the dignity and respect it deserves and relevance is the key to its hard hitting drama. It amazes me the people who complain about this kind of film because the point of a drama is to make an impact on the viewer. Not all films need to follow a traditional happy ending narrative. It’s not a comedy. It’s a Ken Loach film

Less of a documentary style than I Daniel Blake, but an equally powerful film, and just as relevant to understanding the free enterprise, gig economy that treats people like machines. The domestic arguments and conflicts were hard to watch. The effects on children and family life are again highlighted by Ken Loach. He paints a broad picture of family and community life, as well as drawing back the curtain on the details of privatised delivery and social care systems.

Gut wrenching - Sorry We Missed You review by MH

You'll never view a delivery driver in the same way again. Or complain about one. This should be compulsory viewing for everyone who orders goods online for home delivery.

Ken Loaches' last film dealt with the iniquities of the current benefits system and its administration. This one takes on the gig economy and the zero hours contract culture, and for good measure the low pay and appalling conditions of service of  home care workers. Both parents in this movie about a family must work - as is the usual case today - and both sets of problems they face at work are different aspects of a collapsing late capitalist society poorly and chaotically governed and hopelessly  lacking in compassion. Loach shows us how these conditions impact on family life and in so doing how they destroy the 'family values' still endorsed by rightwing governments  - which have lost their way but not achieved insight into the level of hypocrisy which somehow sustains them. It wouldn't be right to call Sorry I Missed You enjoyable. It is very sad in its accurate portrayal of the lives of very many people in the UK today.

Harrowing & affecting drama - Sorry We Missed You review by AW

Loach doing what he does best. Thoroughly engaging characters and gripping story. I found it mesmerising.

Fighting injustice - Sorry We Missed You review by EW

This powerful and moving film is a call to fight injustice, and should be viewed by as many people as possible.

Powerful and unmissable - Sorry We Missed You review by DA

Before Covid-19, we kept being told how unemployment was at an all-time low. This film lays bare how insecure and precarious some of these newly-created "jobs" are and gives us an insight into working conditions of come of those working in the Gig economy. We learn how the main character, a parcel courier, is "self-employed", so enjoys no such luxuries as holiday pay, yet has his round prescribed and gets fined £100 (on top of his day's earnings) if he has to take a day off for family reasons. When he gets beaten up and has his parcels stolen, he is required to pay £500 to cover the cost of two passports that were stolen, as well as £1,000 for the tracker he's required to carry around with him, which beeps if he leaves his van for two minutes to answer the call of nature (hence he's provided with a bottle to piss in). His wife, "employed" as a carer, endures similarly abysmal employment conditions, being unpaid for her two hours' "break" during her 14-hour day and having to pay her own bus fares to her various calls.

This film will cause those of us lucky enough to enjoy regular, full-time employment to count our blessings and caused me to reflect on my irritation recently towards a courier who put an empty Amazon package through my door. A powerful, angry film that everyone should see.

Tough but powerful viewing. - Sorry We Missed You review by IS

Hoping that self employment through the gig economy can solve their financial issues a family quickly realise the potentially destructive and brutal nature of that employment culture.

Another powerful social commentary of aspects of life in Britain today from Ken Loach.

Once again he shines a light on the plight of many working class people and the issues that they face.

Loach does this so well, and again the message is in your face from the beginning and it starkly shows some of the dangers of Zero hours contracts for many.

Like ‘I am Daniel Blake’ before it, it is not an easy watch, less so because I can relate to many aspects of it from my own life and also many people that I know that face these very challenges today.

Loach took the brave risk of using a cast largely made up of amateur actors, which although obvious in many scenes, it does add a further sense of reality in to the film.

A good film with a powerful message but a tough watch.

As a great respector of Ken Loach films, I found this one particulary realistic and distressing - not light entertainment!

Having been involved in a debt advice service, I know how easy it is for people to fall into debt despite trying their utmost to manage.

Hope this will an an eyeopener to people who have little idea of how people manage who live with a limited and uncertain income.

British Drama - Sorry We Missed You review by GI

Director Ken Loach's follow up and companion piece to I, Daniel Blake (2016) is a bleak and moving story. A social drama about a Newcastle family of couple Ricky (Kris Hitchen) and Abbie (Debbie Honeywood) and their two children. Having had their dreams of owning their own house dashed in the 2008 financial crash he's struggled to find regular work and Abbie works for a care agency travelling around the city (at her own expense) to help ageing and disabled people get dressed and preparing their meals. Ricky sees an opportunity as a delivery driver but he has to buy his own van and the company doesn't employ him but gives him 'work opportunities' with fines for failing to meet deadlines. The company effectively avoids having to comply with workers basic rights and Ricky soon sees he's been sold a lie and debts mount as there are no allowances for time off. The film looks long and hard at the gig-economy culture that traps people in a spiral of debt and pressure to earn little. Like Loach's work in general this is powerful stuff and even if you don't agree with his political views there's no escaping his exposure of systems like this that are constructed to exploit people for profit. The use of unknown and non-professional actors enhances the documentary feel and whilst the narrative slips into melodrama this is used to show how the pressures begin to destroy the family unit. A sad film, and a sad indictment of a system that allows this sort of enterprise to flourish, that is well worth watching.