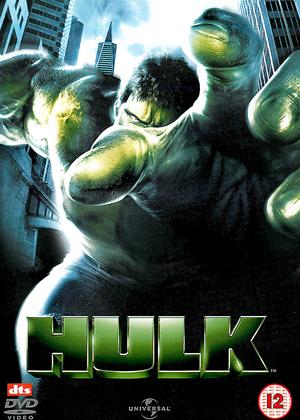 Hulk filled me with anticipation, after all other Marvel movies as of late have hit the bullseye with deadly accuracy and with full force. The Blade Trilogy, X-Men one and two and the Spiderman movies all had me waiting eagerly for this one. (Before you ask, yes I DO like Daredevil too)

And the film starts off promisingly enough, although too be fair it takes a fair old time to get going, but once it does wow!

Bana as the Hulk/Banner is fine as is most of the supporting cast and Ang Lee puts a new slant on the old story of the not so jolly Green Giant. You will love the fight between the Hulk and the Army in the desert, the trail of destruction left in the city and then wonder why the part before the end where he fights his own dad, is so muddled and sadly confusing. Thats the only thing that stops me from giving it a ten out of ten, but put that aside and you have a pretty darned good film here.

True you can't rate it as highly as the Spiderman films or indeed the superb X-Men movies, but it's not a bad effort at all. The ending is open for a sequel and part of me hopes that someone takes up this option.

Too much drama not enough action. - Hulk review by CP Customer

Of all the comic book adaptations Hulk is easily one of the worst. Ang Lee takes huge liberties with the original comic book story, tacks on an overly dramatic back story making the majority of the film is a sombre dramatic piece with overly serious performances from the cast, when in reality ‘Hulk’ should have been a violent romp with a big green guy in purple pants who smashes stuff up.