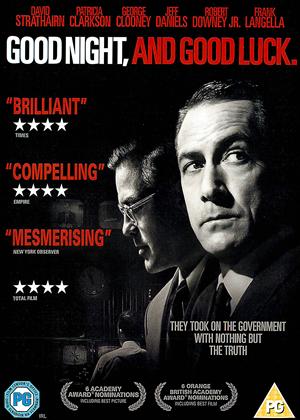 Rent other films like Good Night and Good Luck

First of all, feast your eyes on the black and white - think superb portrait, not grainy old films. The atmosphere of the period is beautifully portrayed and there isn't a poor performance in the film. Yes, it's still highly relevant and should, perhaps, be compulsory viewing for politicians on both sides of the Atlantic. If you aren't sure what the Mcarthey era was about, watch this - a gripping film on all levels.

The movie tells the story of Ed Murrow of CBS during the mid-50's when McCarthy hunted "communists". It may not be completely historically correct, but in a time when we are in a "War against terrorism" and religious fundamentalists are trying to intimidate journalists, it is worth to repeat that journalists should be independent of money/politics/ideologies in order to investigate politicians who want to "protect" us from evil or minorities who think they should not be subject to criticism/investigative journalism. Seems to capture the time good with a chain-smoking Murrow!

Footage from the era of fanatical commie paranoia serves to emphasise the reality of this worrying historical fact, that it is easy to fear being victimised and allow bullies to reign. Religions throughout time have had periods of this oppression of free thought, some much more intensely and for much longer. Even now in Western society there are fanatics keen to assert themselves in this way.

The acting of Clooney and Downey is excellent but some is mediocre. The black and white photography was well worked (lots of cigarette smoke curling through rays of back-light).

The reason that I don't rate higher is that it is not a particularly gripping plot nor did I feel the paranoia, which seemed to be the intention of the film. The moral is not new and has been done better.

Directed by George Clooney and filmed entirely in black and white this tells the story of Ed Murrow (brilliantly played by David Strathain)and the end of McCarthyism in the 50's.

It's a very interesting story indeed and if you've ever wondered what happened to Senator McCarthy and how his communist witch hunts came to an end this is a must see film.

Three stars really doesn't do this film justice and personlly I throughly enjoyed every minute of this. I would even go so far as to say it's the best movie I've seen in a long while. Brilliant.

A really interesting film shot in black and white with a documentary feel to it. It is about the work done by Murrow and his reporting team in 1950's America, when they bravely challenged McCarthy's witch hunt against Communism. It is understated but fascinating with superb performances, especially by Strathairn as Murrow.