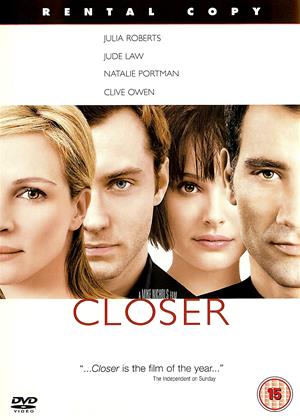 Dan (Jude Law) a lazily dressed failed novelist who can’t find his “voice” writes the obituary column of a London newspaper. He meets young and sexy, exotic dancer Alice (Natalie Portman) after she’s knocked down by a car. There’s an instant attraction and a relationship begins. Still it’s not long before Dan becomes interested in another pretty woman.

Law following up his fine turn in Alfie produces an excellent performance as a man with a mixed character who’s addicted to the truth yet takes delight in deception. Natalie Portman, such a natural performer also impresses, seducing the viewer as the impulsive and voracious Alice.

Clive Owen plays Larry a dermatologist. Working class lad made, good he’s nouveau upper-middle class with some dangerously rough edges. His character arc is broad but there’s nothing that Owen can’t pull off in this role. From pathetic and obsessive to petulant and sexually aggressive, his performance is near perfect as he hits a career high.

Julia Roberts rounds out the quartet of lead stars and shows us a few new tricks.

Brutal at times, it’s also tender and touching, Closer is a wonderful effort from director Mike Nichols. Totally uncompromising in its delivery, script and portrayal of couples in love, and hate, it won’t be to everyone’s taste. Yet it’s distinctive, compelling, the characters are believable and there’s not a join-the-dots romance in sight. I personally thought it was brilliant.

Closer is the closest I’ve seen to real life at the cinema for a long time.

All right - Closer review by A

It was good, but not really remarkable. Not something you'd remember having seen in a few years time.

one to miss - Closer review by CP Customer

so slow couldn't make head or tail of it

Every time a Jude Law movie comes out I am lured into watching it becasue he is lovely to look at and yet every time I sit down to watch the actual movie it turns out to be a bore. And so it is with Closer. Roberts and Law just don't have the chemistry going on and you know that they can't really last. The weird way in which the time flies and suddenly you are transported four months on is umm...strange. I wish I could say it was profound or deep and meaningful in any way but it really isn't. Yes it explores relationships but not in an exciting kind of way...

A strange film with enormous amounts of bad language. Compulsive viewing though( if you can bear the language)

Mike Nicholls gets masterful performances out of the four leads. I don't normally rate Clive Owen but this has to be a tour de force for him, as he portrays a very complex character who is sinister and weak at the same time. Natalie Portman is the other highlight of the film, as an exotic dancer who catches the eye of Law and Owen. The film is brutally honest and I think some people will find it painful to watch, yet it is a realistic look at relationships in today's society.

This film is the anti-Love Actually, in fact, to soppy old Richard Curtis, this film is the devil. I compare this to Love Actually because they are both about love in London amongst people in their 20s and 30s. They couldn't be more different, yet the same.

Mike Nichols' CLOSER came out in 2004 and I've probably seen it about 10 times now. Each time I watch it I am left utterly shaken by much of it. Watching it tonight, I spotted a few stylistic choices that have dated it already, but on the whole (and ignoring modern technology advances) this is a pertinent, relevant and wicked film about the birth and death of love.

For me, it contains career best performances from Clive Owen and Julia Roberts. It also stars Jude Law and Natalie Portman, who are both excellent. I think Clive Owen's thwarted alpha-male is the plum role and he is electric to watch in all of his scenes. Based on a West End play from the early 90s by Patrick Marber about two entwining couples, this is a foul-mouthed, brutal, sharply written dance to the death that skewers male and female sexual ambition, and reveals some very cold and arch thoughts on love dynamics. It's stark, and I've got to say, I love it, and I wish I could write a play like this one day. It's like a gift to actors.

At times, the film is stagey, and some of the dialogue would never get said in real life, but it's that slight disconnect with reality that makes this so watchable. It's a brave career choice for Julia Roberts, but it was very nice to see her play a 'real person' this once - somebody utterly relatable. I love the confrontation between Jude Law and Clive Owen, where the latter makes the former burst into tears. It's combat without a single blow (ok one blow) being landed... I couldn't take my eyes off it.

Two of my favourite lines...

"Have you ever seen a human heart? It's like a fist, wrapped in blood..."