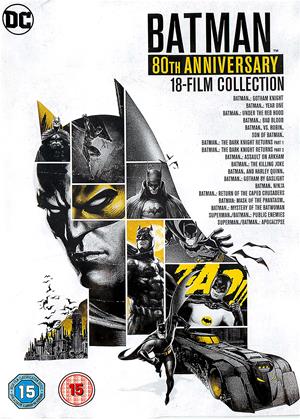 Synopsis:
Hidden atop a secret mountain stronghold lies the League of Shadows and its fearless leader, Ra's al Ghul. Together with his equally dangerous daughter, Talia, he oversees a trained army of assassins with plans for global domination. But an uprising from within the League now threatens to shift the balance of power and sends Talia and her young son, Damian, fleeing to Gotham City. With assassins on their trail, Talia seeks the protection of Batman, who, unbeknownst to him, is the boy's father. With his son in tow, Batman wages war against the villain Deathstroke and the League of Shadows, all while teaching his headstrong boy that one can't fight crime by becoming a criminal.
With help from Gotham's finest, including Commissioner Gordon and Nightwing, Batman will soon discover that his son and most trusted ally are one and the same!
Directors:
Ethan Spaulding
Producers:
Benjamin Melniker, Sam Register, Michael E. Uslan
Voiced By:
Jason O'Mara, Stuart Allan, Thomas Gibson, Morena Baccarin, Dee Bradley Baker, Xander Berkeley, Giancarlo Esposito, David McCallum, Diane Michelle, Andrea Romano, Fred Tatasciore, Bruce Thomas, Kari Wahlgren, Sean Maher
Writers:
Bob Kane, Grant Morrison, Andy Kubert, James Robinson, Joe R. Lansdale, Marv Wolfman, George Pérez, Gerry Conway, Don Newton
Studio:
Warner
Genres:
Action & Adventure, Anime & Animation, Children & Family

Reviews of Son of Batman

Bruce Wayne grew up in riches to be a superhero that takes down criminals with non-lethal methods. Damien Wayne grew up in a mountain dojo of assassins to be a cold-blooded killer of any enemy in his way. Can the two come to recognize each other as father and son? Will they compromise their differences in crime fighting to stop the evil Deathstroke in his villainous plans? Has Warner Brothers really run out of great Batman stories for their animated features?

I usually look forward to these direct-to-video DC Comics movies in how they manage to do more than the live-action films and give a heavier focus to the arcs of the comics. Some falter in quality, but all of them were at least mildly exciting in how they ventured into new territory with each new film. Son of Batman may be one of the biggest misfires just for how bland it appears. Everything from the animation to the story to even the voices all just appear substandard compared to the previous DC animated films.

There is a decent setup with Bruce’s son, secretly born from assassin Talia Al Ghoul and raised within the League of Assassins by his grandfather Ra’s Al Ghoul. Hardly even a teenager, the young lad is now a skilled killer trained in the same arts as Batman himself. But when Deathstroke and his army of knockoff ninjas with guns storm the League’s headquarters and murder Ra’s, Damien aims to exact his revenge with the lessons he’s been taught. His path leads him to Gotham City where, despite Talia’s warning, Bruce Wayne is not ready to handle his estranged son. In Bruce’s neck of the woods, Damien appears as a fish out of water not familiar with Bruce or Batman’s morals.

But rather than taking an emotionally moving route with such an angle, Son of Batman mostly phones in this premise for a sitcom style. Damien jokes about how he’ll never put on the overly-bold Robin suit, but ultimately does so. Damien breaks into Bruce’s company office and begins messing with all his stuff. The script even goes for plenty of easy jokes with Damien complaining to Bruce about why he can’t drive the Batmobile. If Damien were a plucky little rascal, I could buy these moments. But as a trained assassin who has spent his entire life cooped up in a dojo, I’m surprised he’s able to muster such wit. Ra’s must have had some buddy cop movies in that compound.

The story itself does little to be more than a revenge plot. Padding out the script are some fight scenes between Killer Croc and a swarm of Man Bats. There is little connection to these fights and the actual plot to stop Deathstroke. It’d be forgivable if the action was well-animated, but the animation falls short for this feature. The drawings per second dips pretty low in some scenes that make the production feel more staged as anime in the vein of Avatar: The Last Airbender. It’s suitable enough for television, but underwhelming for a direct-to-video feature by DC’s current standards. The final fight in which Batman and Damian team up against Deathstroke just didn’t feel like a battle of expert assassins. Maybe they’re all just talk.

What really irked me more than anything was the voice casting that just didn’t fit as well. Jason O’Mara does a decent job as Batman, but just doesn’t hit that perfect note as the many actors before him. It doesn’t help that this voice appears to be the staple for all upcoming DC animated movies. I’m hoping the voice will grow on me. Stuart Allan is okay as Damien, but never really hits that dead-serious tone of an assassin since birth. The biggest miscast for me was Thomas Gibson as Deathstroke. I’m sorry, but he just doesn’t have the right voice for that character even if his face is obscured by the mask. Hearing Gibson as the antagonist just took me out of the movie.

Son of Batman isn’t without its charm, but it sure stumbles hard with such a premise. I’ve often said that even at their worse, these DC Comics animated movies are still exciting and worthy attempts at something new and different in western animation. This is the first film that is making me have seconds thoughts. It’s a rare misfire from a rather stellar block of animated features. All you can do is hope that the next one will be better. It may still be decent, but Warner Brothers shouldn’t settle for decent with their track record.