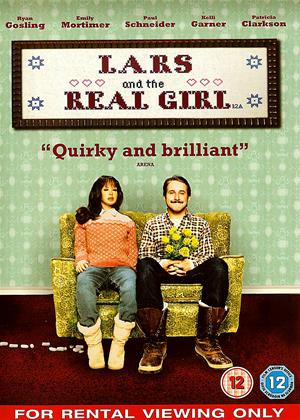 Reviews (3) of Lars and the Real Girl

I found Lars and the Real Girl refreshing, as it would have been easy to go down the avenue of an outright comedy. Instead the writers have created a tale that concerns a man with mental illness who has withdrawn into himself.

The arrival of the doll allows him to integrate with the daily activities of life and the locals. How this occurs and his ongoing recovery is enchanting, with the odd laugh now and again.

This is a great movie with an unusual plot, who could not cringe when the real girl is revealed and who would not want to live in a world where difference is so readly excepted. A great film well worth watching.

A Man with Mental Health Problems who doesn't Slaughter Random People.....that's a different take. - Lars and the Real Girl review by DS

What we have in Lars and the Real Girl is a modern retelling of Pygmalion. A lost, lonely man, delusion perhaps, bestows, life, love, on an inanimate object, a facsimile of a woman. In Pygmalion, the love of the sculptor fantastically brings that object of his love to life but with Lars and the Real Girl writer Nancy Oliver has the love for ‘Bianca’ transferring to the family, friends and town community, bringing them ‘to life.’ Oliver has writing chops having contributed to Six-Feet-Under and True Blood but here she shows a softer side. Much like those TV shows we are in a fanciful place, after all if the last few years have shown us a lot of people are plainly and irredeemably awful, but the reaction to Lars’ problems in the story is beautiful, poignant and dare I say palate cleansing. Even with this wishful thinking Oliver shows a proper understanding of mental health and wrote a careful and gentle depiction. The most telling line comes early in this film from the superb Emily Mortimer as she talks to the equally superb Patricia Clarkson, ‘How can I help?’ Indeed.

Director Craig Gillespie more recently of the, in some ways similar, ‘I Tonya’ and the ‘I haven’t seen it yet’ Cruella, has the perfect cast to work with. Ryan Gosling, an actor who goes from eclectic roles with admirable ease, is perfectly cast as the soft and gentle Lars who has been profoundly affected by early events in his family, in particular his mother’s death due to his birth. As mentioned previously Emily Mortimer is impressively believable as the kind and caring sister-in-law Karin and special praise must go to Paul Schneider, most recently seen in Amazon’s ‘Tales from Loop’, who has the challenging task of, at least in the opening acts, the least sympathetic character, he clearly is playing the part of the cynical viewer. Patricia Clarkson is equally impressive as the clever, understanding and helpful town doctor, Dagmar, we would all love our GP to be this impressive lady. The ‘real girl’ of the story is played with cute vivacity by Kelli Garner to round out the main and consistently top form cast.

UK viewers will be delighted to see Canada’s answer to Mackenzie Crook, Maxwell McCabe-Lokos, who when he rolled up early on as Lars’ work colleague, I thought it was Mackenzie Crook for a few seconds.

The film begins by fooling you into thinking it is a full-on comedy, the introduction of Bianca by Lars to Gus and Karin had me laughing so long and loud that my wife, still in bed, called down the stairs to see if I was okay, but much like I, Tonya, the ‘funny’ soon gives way to the drama but in such a skillful way it does not jar and you really do not notice. If you are made of stone, or one of the irredeemably awful people I mentioned earlier, you will not latch on the underlying sadness of the fragile and lost Lars. What Oliver’s screenplay, the directing and acting all are trying to show us, and successfully achieve, is that understanding, empathy and compassion are always the strongest and kindest way to help each other. With Lars’ delusion this could have been a huge joke of a film, but it is to everyone’s credit the initial hilarity drops off like Autumn leaves and we end up with a sensitive and small peek at mental health and the importance of compassion in friends and family.

The whole film is intelligently made, with a clear comprehension of mental health, a refreshing and interesting take on the topic that is very much in the fore of local and national discussions these days.