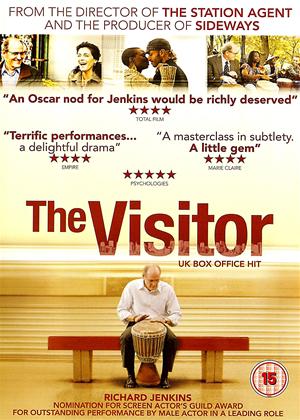 Reviews (2) of The Visitor

College professor of economics Walter is a stern, single minded and often inflexible widower living in a Connecticut suburb, who after the loss of his musician wife is struggling to fill the musical void in his life left by his wife.

After lending his name as co-author to a colleague’s paper, Walter is forced by his department head to present a paper an academic conference in New York. Unable to get out of attending, he reluctantly arrives in New York and to the unoccupied apartment where he lived with his wife only to find it occupied by a young immigrant couple named Tarek and Zainab, who have been conned into renting it from a crook claiming the apartment was his. Although they have no other place to go, they apologise, pack their belongings and leave, but in a rare moment of compassion Walter allows them to stay. Over the next few days a warm friendship develops between Tarek and Walter, and as a musician Tarek teaches him to play the drum. Though after Tarek is sent to a detention center as an illegal immigrant Walter finds himself pulled into an emotional commitment to Tarek, his girlfriend Zaineb and Tarek’s mother Mouna, and well as dealing with the harsh reality of the U.S immigration system post 911.

Much like Thomas McCarthy’s previous film ‘The Station Agent’ the story is essentially that of a quiet withdrawn man who drops his emotional guard and opens up to the pleasure of friendships and living, but discovers as well as enriching your life these things ultimately bring complications to it as well. Though ‘The Visitor’ is a much darker and more dramatic film than McCarthy’s last, the film is peppered with humorous moments and the story holds your attention from start to end. The direction, pace of story and acting is all superb. Though for me it lacked that special quality ‘The Station Agent’ possesses.

The last refuge of compassion - The Visitor review by TE

A quiet masterpiece of a film, even more relevant today than it was 13 years ago when it came out.

The narrative is steadily paced and credible at every point. Thomas McCarthy's skill as a director is to create engaging characters from very sparse material, and here we immediately care for the four main characters.

The contrast between real, oppressed lives and the academic futility of Walter's professional milieu is superbly portrayed.

This is humane film-making at its very best.