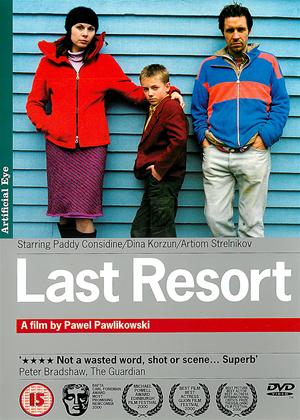 This low key and finely acted story of a Russian immigrant (Dina Korzun) and her son claiming asylum, their life in detention, and their relationship with a English arcade owner (Paddy Considine) was a sympathetic early reading of an ongoing controversy. Social realism in British cinema has clung on against the odds, and this is one of the better examples.

Paddy Considine is one of my favourite Brit actors - and I keep coming across films of his that I wasn't aware of. This one is from 2000 - a BBC film so excellent production values - and Paddy certainly looks somewhat younger than he does today! The director is Oscar-winning Pawel Pawlikowski.

The film tells in quite a sparse way the experiences of a young Russian woman who flies into this country with her son - but her fiancé doesn't turn up at the airport to meet her. Questioned by immigration staff, she says she is a refugee. This is not a good move as she + son are immediately shipped off to an asylum-seekers dispersal area, and a dismal existence in a run-down flat in a tower black with no money (just vouchers), no job (she has no work permit), no contact with her 'fiancé' (because there's a single public call box and frankly he's not interested), no escape (constantly watched by CCTV and returned by police) and threatened with prison if she does abscond to London.

So far so grim. But she is befriended by Paddy Considine as the operator of an amusement arcade who helps her find her way round the system, fixes up the flat, plays with her son etc. Clearly he is hoping for more, but you'll have to watch the film to see how this plays out...

[Aside: It was filmed in Margate (although the dialogue refers to 'Stonehaven'). I recognised the semi-derelict Dreamland amusement park, eventually compulsorily purchased after a court case, at last renovated and reopened in 2015 although I understand parts of it remain fire damaged]