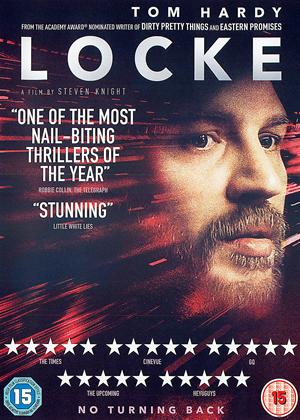 Clever film that lingers in the memory - Locke review by RR

Such an unusual film, which takes place in a car journey over 3 hours on a motorway to London, with only the driver (Locke) appearing on screen. The other characters in the story are heard on the phone. I found it rather strange at first, but the unfolding story held my attention, and it stopped at just the right point to keep me thinking about it for several days.

I'm surprised by such poor reviews here! The film is really cool and impressive. I was really gripped by Ivan's story which we learn about through yes, a series of phone calls told from the inside of his car. Tom Hardy puts in a splendid performance as do an equally accomplished cast of actors on the phone to this somewhat stressed lead character. It's a movie about people and real life. It's not your usual thriller but it really is tense and very watchable. Some beautiful cinematography too, the motorway rendered in some glorious colours. Very good.

It works - Locke review by PT

You would think a film about a man driving away from his work commitments of overseeing a multi million pound concrete pour because he has a deeper moral commitment, wouldn't work for a film. Furthermore, apart from about one minute when Ivan Locke walks to his car and removes his concrete covered rigger boots, the remaining 81 minutes of the film feature Ivan in his car driving down the motorway. It does work though.

We see the reason for a totally reliable and work conscious man to abandon the pour as the film progresses, through his telephone conversations. The conversations were really engrossing and keep you hooked for the journey.

I really enjoyed this courageous offering from Steven Knight.

This film is an oddity - and probably would have worked better as a TV drama or even a radio play. As a movie, I can't help feeling the talent is wasted - and still wonder what the Costume Department did as there is one man wearing one lot of clothes in this film!

If you love concrete, you'll adore this, as civil engineer-ish bloke drives away from his work responsibilities for other reasons (no spoilers here).

I must admit it got on my nerves after a while and, fatally, I just didn't believe this character would do this (despite his backstory).

The reaction of those he speaks to on the phone also tested my patience and I couldn't quite believe the reactions.

What an impressive film, so original in concept and beautifully photographed. It was rewarding to travel down the motorway with this man called Ivan Locke, and be close to him - his story and emotions. I can also recommend watching extras and commentary for an insight into their film production methods.

A waste of 1.5 hours - Locke review by CP Customer

This was a complete load of rubbish. I was extremely disappointed. If you want to watch one man driving down the motorway taking and making phones calls about concrete this is the film for you, otherwise I would say don't bother. I wish I had read the reviews before renting. Why Tom Hardy decided to star in this film I have no idea.

Just watched this rubbish never so bored nearly fell asleep ! He never got to where he was going he was just talking people on the phone making excuses why he had to leave! what was the point of making this film absolutely no action only one actor!

A man sits in a car. Yawn. - Locke review by Alphaville

A man drives from Birmingham to London at night while talking to people on his phone. The camera watches him. So do we. However good the acting or the writing, we watch a man sitting in a car. At least it was cheap to make. It would be boring in the theatre never mind the cinema. Perhaps it would make a good radio play. The heart aches for some cinematic imagination.

Waste of my life!! I cannot give 0 stars so it will have to be 1 - Locke review by NL

This film is about a man in a car - well done BMW for all the promotion you received from this film!! It did not go anywhere, it was a pointless storyline, utterly boring and not realistic at all. This man gives up his life so he does not make the same mistakes his imaginary Dad made, just to prove a point to someone that does not exist but who he talks to and the camera films.............ha ha ha

There was an awful lot of overacting and that is hard to do when the only characters are this one man and a lot of family and friends/colleagues on the over end of the phone. Tom Hardy did such a poor Welsh accent, you can tell that he is trying too hard. It was completely pointless, why did he need to be Welsh??!! It would have annoyed me less if he had not had any accept but his own, it started to grate on me just after 10 minutes it was that bad.

The genuine only reason why I watched it up to the end is because I actually wanted to see if he eventually got out of the car - and he didn't!! Wow, what a waste of time. I cannot give 0 stars so it will have to be 1 star and that is way too much

Do yourself a favour and watch some paint dry instead......

The only interesting thing was trying to work out what all the people in the credits did. It's a guy in a car being filmed by some other guys in another car/truck using a low loader and a crane.

Locke in a very bland nutshell is film about a bloke in a car for a whole 85 minutes. Sound boring? Well it shouldn't because it has the fun, fast-pace action, engaging and astounding acting and a great British cast that includes the wonderfully talented Olivia Colman.

Directed by Steven Knight, Locke is a gripping drama movie that centres itself on the awesomely cool Tom Hardy who plays the devoted family-man-come-construction-manager called Ivan Locke. Ivan is a man who works excruciatingly hard to achieve the life that he always dreamed of, which entails a great job, a beautiful wife and family. Nonetheless, all becomes clear in this cesspit of ambiguity as Locke unveils a secret that distresses and shocks his family and puts his job on the line. Sorry Tom Hardy fans but he’s not a good guy in Locke. In fact, he’s the typical love-rat that gets his co-worker pregnant. Ivan does the ‘noble’ thing and drives to London to welcome the illegitimate baby into the world while his family are waiting at home. However, there must be some type of product placement in the film as Ivan Locke is constantly juggling conversations of confessing his infidelity to his wife, liaising with his boss and reassuring his mistress on his phone.

Steven Knight wrote Locke and co-directed it with Nick Angel; this Mystery and suspense drama has been given a respectable 15 rating for cinema and film as it contains strong language so if you're underage, sorry folks but you're just going to have to wait until you're old enough to watch this motivating movie.

The public responded very well to this movie as there were a lot of great reviews about Hardy’s acting skills and Knight’s writing skills; they were the perfect combination for a phenomenal masterpiece.

A lot of critiques have put their hands together and applauded Hardy for his one-man-band performance; it mustn't be an easy job to act an entire movie out with a huge proportion of monologues but this highlights Tom Hardy’s impressive expertise. He manages to captivate them as well as make them believe his various emotions. It really is a true talent.

Locke has a great sense of humour; while it isn't a comedy, it does have some witty quotes in the script which will leave you smirking or reiterating it to your mate the next time you see them. We cannot help but love Locke’s half-arsed and satirical attitude, which allows him to come up with things, such as ‘Donal, don’t trust God when it comes to concrete’. Also, we can't help but snigger at his responses to his co-worker: ‘B: Be quick! L: Yes, but there are speed limits!’ and ‘B: I love you. L: Okay then. B: Can’t you say it back just once? L: No, but I can be there as fast as traffic will allow.’

Locke is a completely motivating film with a great plot that makes you feel all of the emotions.