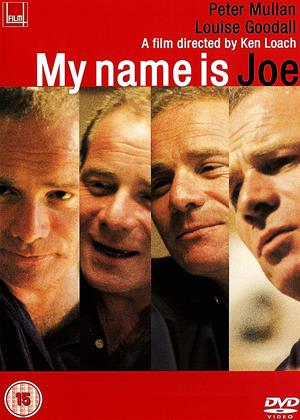 Synopsis:
'My Name Is Joe' is a slice of life so raw that you can see the blood dripping off it and as in real life it mixes humour, passion, tragedy and violence in equal measure. Joe is a recovering alcoholic and has done a few things in his past which he’d rather forget. Like most people he knows, he’s out of work but he keeps sane by coaching the self-styled worst football team in Glasgow. When one of Joe’s players, Liam, gets involved with some local gangsters a chain of events is set in motion which not only threatens the lives of those concerned but also comes between Joe’s budding love affair with social worker Sarah.
Actors:
Peter Mullan, Louise Goodall, Gary Lewis, Lorraine McIntosh, David McKay, Anne-Marie Kennedy, Scott Hannah, David Peacock, Gordon McMurray, James McHendry, Paul Clark, Stephen McCole, Simon Macallum, Paul Gillan, Stephen Docherty, Paul Doonan, Cary Carbin, David Hayman, Martin McCardie, Jamie McNeish
Directors:
Ken Loach
Writers:
Paul Laverty
Studio:
Channel 4
Genres:
Drama, Sports & Sport Films
Awards:

The best film I have seen for a long time. The acting was superb. The variety of characters was fantastic.It was Motivating, emotional, and incredibly funny. This is "Life" and how it really is. I will definitely be adding this film to my collection.

My name is Hope - My Name is Joe review by RhysH

Ken Loach points his camera at the lower depths and records it with integrity. Despite the despair that runs through this film, there is a genuine and moving love affair and some wonderful touches of humour. The humour is in the two football matches, shades of Loach's 1969 film Kes.

The performances are compelling, Peter Mullan as Joe, Louise Goodall as Sarah and, in particular, a moving performance by David McKay as Liam.

Loach pulls no punches with this. Although Glasgow, and its accent, is well-suited as a setting, this plot could have played out in any British city or provincial town, as those on the edge of society are constantly presented with Hobson's choice and condemned to the inevitability of their chaotic lives. We see committed and well-meaning Individuals doing their utmost to help, but a dysfunctional society sooner or later overwhelms the poor and weak.

A deeply impactful & moving film, with an incredible & award winning performance from Peter Mullan - My Name is Joe review by TB

Peter Mullan is an actor who I have seen in mainly supporting roles over the years, but who always makes an impact. Whether it’s his role as the Mother Superior in Trainspotting, Les in Young Adam or lead role as Joseph in Tyrannosaur, his impact is always felt and there are not many people who do brooding and threats of violence better than him. I rented My Name is Joe on a complete whim, because I was reading an interview with an actor (I forget who it was,) who stated that Mullan’s performance as Joe was one of the best they had ever seen. I also saw that Mullan had won Best Actor at Cannes for his performance, so hopes were high.

And they were met and massively exceeded. Mullan is the absolute stand-out and flat-out best thing in this film. From the opening scene, where you do not see him, but hear his voice over the credits, talking about how he came to be where he was, you are totally immersed and believe in the life that has been created by him.

Louise Goodall also makes a strong impression, and her chemistry with Mullan is fantastic. The power of her performance, for me, was the ability she had to communicate so much just with a look or a few quietly spoken words. The rest of the cast were also great, and as is with all Ken Loach films, many of the extras were not actors but members of the local community, who were able to add their own authenticity to the mise-en-scene.

The story and how Joe got to where he was is a difficult but inspiration one. This is the second Ken Loach film I have seen, but in reality the first one I have properly taken in, as like most people, the first one I saw was Kes when I was at school. Loach has an incredible way of building up and creating worlds which feel authentic and lived in, and the actors are not actors but people who are a part of their environment, which is the essence of great film making, in the same way that Mike Leigh is able to do with such skill.

The only problem I have with this film is the ending, which basically finishes extremely abruptly and leaves several questions unanswered, as well as leaving the story in a situation that it wouldn’t be in following the events. But this is a minor gripe and the journey that you go on, and the impact that is left after the credits roll, is significant.