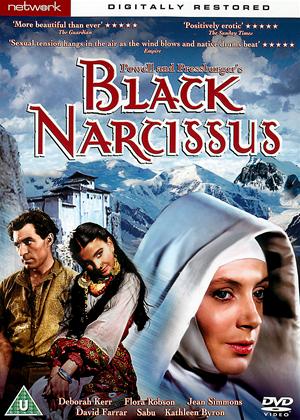 One of several genuine classics from the directing and producing team of Michael Powell and Emeric Pressburger, the most enduring and successful partnership of its kind prior to Joel & Ethan Coen, this extraordinarily beautiful film is of course a bit dated, as 70-year-old movies tend to be. Modern viewers may wince at the number of white actors in brownface playing Nepalese characters, some of whom are portrayed in a patronizing way that's meant to be funny, and although Sabu is in it because he's the biggest star they could find who was genuinely Indian, they might have been better off with a browned-up white actor who could act. Certain things can only be hinted at, in particular whether Sister Clodagh (Deborah Kerr) has more than a theoretical knowledge of what her vow of chastity prevents her from even thinking of doing. And inevitably it's a bit slow.

But it has a great deal to recommend it. In particular, although the nuns are so out of place in their new home surrounded by cheerful highly-sexed pagans that you almost expect the locals to start building a wicker man, at no point is it ever implied that Christianity is superior to what the natives get up to. Indeed, the awkward presence a holy man in a permanent trance in their back garden reminds both the nuns and the audience that when they really want to, these sinful unbelievers can renounce the pleasures of the flesh far more successfully than the increasingly frazzled sisters have a hope of doing.

Kathleen Byron stands out as the nun who, right from the start, is half-crazy and getting crazier by the minute; the loopiest nun other than Glenda Jackson in Ken Russell's "The Devils" was obviously based on her performance here. And perhaps because she never has to speak, Jean Simmons is very convincing as a 17-year-old native girl so uninhibitedly sexy that at one point she near-as-dammit does Britt Ekland's "Wicker Man" dance. This is a situation that can't possibly end well, and inevitably it doesn't. Michael Powell loved to present his audiences with interestingly twisted characters they weren't expecting, such as the angel in "A Matter of Life and Death" who was nowhere near as honest as you'd expect an angel to be, and of course the serial-killing pervert in "Peeping Tom" who was actually a rather nice man gone horribly wrong through no fault of his own. Here he gives us a movie in which the focus throughout is on pure and saintly women who devote their lives to God, not one of whom is either pure or saintly, though some fake it better than others. Nobody else in the film has these qualities either, but they care very little or not at all, and in the end, the characters who finish up happiest are the ones who simply did what came naturally. Here endeth the lesson. Amen.

Unexpected bonus: a commentary track by Michael Powell and, of all people, Martin Scorcese!