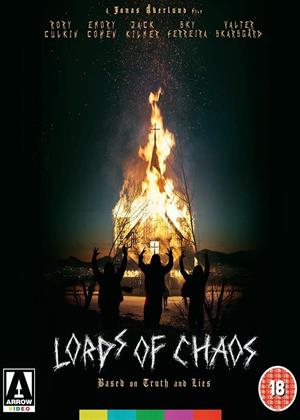 Reviews (1) of Lords of Chaos

A lot, lot better than you'd think it would be..... - Lords of Chaos review by CR

After watching 'Lords of Chaos' (which I very much liked) , the one phrase that kept popping up in my head was 'the very epitome of toxic masculinity'.

Being a heavy metal fan and remembering the bizarre set of events, I can honestly say that Jonas Akerlund has done a really brilliant job of telling the story of what happened but leaving your in no mind the actions of these 'musicians' to each other and to others, were the actions of extremely childish yet extremely dangerous minds. The very notion of young, naive, extremely impressionable male mentality is played out in this film to devastating effect. When young men aren't capable of expressing or being able to express sometimes complex emotional thoughts, those thing scan be turned around and twisted in corruptible ways. The non-inclusion of parental figures in the film (you only hear their voices off screen) is very telling.  As a viewer you're never left feeling anything but revulsion or sadness and when the violence happens, its extremely difficult to watch, as well it should be.

Some may bypass this film as it may have the appearance of stupidity, but its view of 'gang culture' is laid very bare for all to see