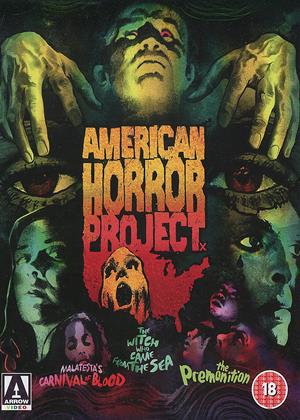 Synopsis:
Roll up, roll up! Step right up for Malatesta's Carnival of Blood - the grisliest, freakiest show in town! Virtually impossible to find until its revival on video in the early 2000s, this 1973 cult oddity, from one-time director Christopher Speeth, is a cinematic experience like no other. Arriving at a creepy, dilapidated fairground under the premise of looking for work, the Norris family are hoping to track down their missing son, who, they believe, is somewhere in the park. But it's not long before they find themselves at the mercy of the fairground's fiendish proprietors and the cannibalistic ghouls lurking in the caverns below.
Filmed at the Willow Grove amusement park in Pennsylvania, Malatesta's Carnival of Blood is a mind-melting phantasmagoria of carnie craziness which blends elements of Night of the Living Dead and Carnival of Souls, adding an (un)healthy dose of Herschell Gordon Lewis-style gore for good measure.
Actors:
Janine Carazo, Jerome Dempsey, Daniel Dietrich, Lenny Baker, Hervé Villechaize, William Preston, Paul Hostetler, Betsy Henn, Chris Thomas, Paul Townsend, Tom Markus, Sebastian Stuart, James Lambert, Rebecca Stuart, Jim McCrane, Gloria Salmansohn, Karen Salmansohn, Tom Dorff
Directors:
Christopher Speeth
Producers:
Richard Grosser, Walker Stuart
Writers:
Werner Liepolt
Studio:
Arrow Films
Genres:
Classics, Horror

Sign up
The Witch Who Came from the Sea

Reviews (1) of Malatesta's Carnival of Blood

This is a film which could only have seemed like a good idea in the early seventies, when the late sixties zeitgeist wasn't quite dead, but the psychedelic sundae had gone horribly sour, and the cherry on top was Charles Manson. Resembling a cross between "Night Of The Living Dead" and the underrated Monkees mindblower "Head", this is one of the druggiest movies ever made, despite having no overt drug references other than one scene in which a couple of doomed minor characters smoke a joint to make it seem at least semi-plausible that they wouldn't notice the screamingly obvious wrongness of the situation they're in.

Which is almost the only concession to logic in the entire movie. The enthusiastic but unashamedly amateur cast, the only one of whom you'll have seen anywhere else is little person Hervé Villechaize from "The Man With The Golden Gun" and "Fantasy Island", blunder into a dilapidated funfair which is no fun at all, because as soon as the sun sets, or sometimes in broad daylight, hippy vampire Malatesta and his extended family of retarded cannibal ghouls, assisted by their not at all suspiciously named front man Mr. Blood, emerge from their labyrinthine underworld and eat anyone they find on the premises who isn't one of them. Though sometimes they play weird games with their victims first, or do completely random things while their hapless prey wander through what I think is meant to be the carnival's giant secret digestive tract, though the budget is so low it's impossible to tell what all that pink bubble-wrap is supposed to represent, if anything.

The terrible acting, minimal production values and non-existent plot sometimes make this film a chore to watch, especially the scenes in which the heroine stumbles through dark rooms full of plastic sheeting for way too long, presumably because it was cheap to film and they'd run out of ideas, but then something totally unexpected will happen which has nothing to do with anything, but certainly gets your attention! Basically this is a bad acid trip in which everyone and everything is out go get you in freaky ways for no reason at all. It's the kind of film in which the inevitable dream sequence is less weird than the parts that are meant to be real. Although it's sometimes very violent, though far less than the title implies, the inept bargain-basement gore effects and total lack of connection with reality make these scenes no more unsettling than the dismemberment of the Black Knight in "Monty Python And The Holy Grail", apart from one genuine one "ouch!" moment when a syringe draws blood from somebody's arm for real.

It's not so much a conventional horror movie as an irrationally unsettling Surrealist nightmare which could not unfairly be described as Ed Wood on acid. But compared with the lazy cynicism of today's straight-to-video gore bores, the obvious enthusiasm of the people behind this mutant freak of a movie makes it strangely loveable despite its huge failings in almost every department, and a must-see for devotees of truly weird cinema.