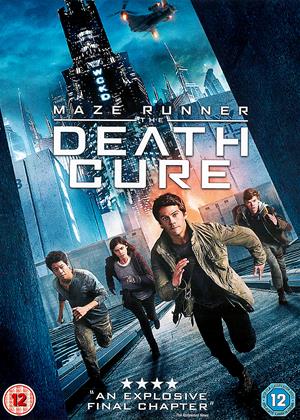 Rent other films like Maze Runner: The Death Cure

Yet more of the same, boring! - Maze Runner: The Death Cure review by CS

First we had 'The Hunger Games', then we had 'Divergent', then we got 'The Maze Runner'. All set in a dystopian future, but basically re-hashes of earlier 60's and 70's movies such as 'Logan's Run', 'Westworld' and 'THX1138'. Nothing new here in any of these franchises, not if you're over 40, but younger viewers may find these new and exciting. However whereas the other films stayed true to man's own failures, The Maze Runner decided to introduce the rather silly and much overused, very lazily in most cases, Zombie format! Each film, not as good as the last and in the same way that the other two franchises started to run out of steam, ideas and storylines, this does too. Coming across more like a modern Mad Max, this film plods along, with not much excitement, very predictable plot and script, you can literally see it coming five minutes before it happens! An ok Sunday afternoon film for teenagers, but sadly lacking any power or presence!

The series of films are OK. I enjoyed them, but the first Maze Runner is the best film out of the 3 films. For me it got more like another Zombie film.

Not great - Maze Runner: The Death Cure review by DD

I enjoyed the first 2 installments and even excused the 2nds weird disjointed tone but this one was just one action set piece after the next. It felt like it dragged on and what actually worked best about the film were the character moments and some of the big moral questions. If these elements were explored more instead of just jumping from one action point to the next then it would have been a much better film. I'd still reccomeded watching if you enjoyed the first 2 to see the conclusion.

A good and engaging end to the trilogy but not as cool and fun as the first two - Maze Runner: The Death Cure review by Tej

The first two films in the trilogy were surprisingly very enjoyable young adult dystopian fiction movies. I have been looking forward to seeing this third part but the delay in the film (due to the year long stop in film waiting for OBrien to recover from the serious on set accident) was so long that I forgot who most of the support characters were.

What this film delivers is a decent adventure, an engaging narrative and closure in the saga. Just doesn't have a great deal of cool sequences that the first two films had.

I give this ending instalment 3.5/5. A just about worthy end for which I am grateful because if there is one thing I despise in the these multi book franchises to film adaptations is premature cancellations (Divergent series being the most hated having reached an entertaining 3 movies only to be cancelled one film short of completing the saga).

Only at the end does The Maze Runner trilogy reveal its hallow nature of yet another young adult dystopian adventure that never hits The Hunger Game levels of popularity or intrigue. I’m honestly surprised this saga even made it this far to the screen, as the likes of the Divergent series fell to the wayside as Hunger Games faded from the trending box office. And while The Maze Runner certainly found a way to avoid an abrupt death, it merely peters out for an ending with plenty of action and showdowns.

It doesn’t help that the final film of the trilogy comes off more like business as usual than a climactic end. Dylan O'Brien is once again the young hero Thomas, trying to lead his tenacious band of rebellious Gladers, the ones immune to a deadly virus, from being enslaved by the inhumane WCKD for experimentation. After freeing another group from a slave train, Thomas’ group of The Right Arm resistance tracks down the WCKD to their last surviving city, which seems to be doing quite well to appear as a towering metropolis of future tech. Aidan Gillen once again plays the eager military official that wants to gun this resistance down and Patricia Clarkson the sinister mastermind behind finding a cure at any cost.

It’s incredibly embarrassing that a film such as this running 143 minutes feels too fast and frantic to make us care about any of it. We don’t get to learn much about the rebellious leader Giancarlo Esposito past his tactics for breaking into the city and taking down its defenses. Kaya Scodelario returns as little more than a familiar face in the laboratory that may or may not be working with the young rebels. And the young rebels themselves are in such a rush to finish out this picture that when the obligatory moment arrives for one of the young actors to have a somber death, I felt nothing for the character who ran and screamed through the picture. Just another supposedly tragic demise. Farewell, forgettable young actor; we literally hardly knew ye.

Without the grunt work of making us care more about the characters in their vanilla world of destruction and zombies, the big action sequences come off as a real bore. I don’t want to be bored by a scene where the rebels hijack a bus and then lift it through the air with an aircraft to make their escape but what is there to be invested in here? After three movies, I felt like I barely got to know anybody here that there’s little stake in this excuse for dystopian theatrics. It’s all just a smattering of cliche action moments. I hope you don’t grow too attached to that one rebel without a nose as he sacrifices himself with a car that explodes into a tower. How tragic it would’ve been if there were actually some personality present.

The action is even further a tiresome mess from the lack of grit. Notice how after everything that has gone wrong, the rebels still seem to disable the soldiers they attack. Even the WCKD soldiers seem to be taking it easy on the kills, merely swatting down civilians and sending them flying into the air with turrets that shoot electric charges. This is supposed to be the final film! Would it kill the filmmakers to take off the safeties so that the villain death with the overused “you sure I missed?” catchphrase means something more?

The Maze Runner comes stumbling to a tiring end with The Death Cure. Compare its similar dystopian tale to the likes of the new Planet of the Apes trilogy, where one can feel more for the characters and their plight than a plug-and-play assembly of action sequences for those who escape captivity and try to conquer their enslavers. When computer-generated apes have more emotion and character than drab teenage heroes scaling trains and towers, I knew for sure this young adult tale missed the mark, tripping all over itself to the very end of the line.