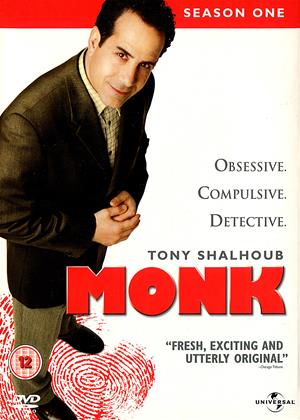 I've watched a few Monk episodes on BBC2 but kept missing them (Monk is buried in a Sat afternoon timeslot), so I bought the DVD.

Basically, Adrian Monk is a former San Fran detective who suffers from OCD = Obsessive Compulsive Disorder. He's obsessed by neatness and detail, as well as being phobic to just about everything (germs, heights, etc). Whenever the SF police get really stuck on a case they call on Monk as a consultant, because his obsessive attention to details makes him an unbeatable detective.

Each episode is a form of murder mystery, some of which are filmed in a Columbo-fashion - i.e. We, the Audience know at the beginning who dunnit.

The show is a quirky mix of mystery and humour, with good acting and an excellent chemistry between the main cast, particularly between Tony Shalhoub (Monk) and Bitty Schrab (Sharoun, Monk's nurse and assistant). You'll enjoy trying to spot the little details when Monk does and figure out their meaning. I'm now addicted and am waiting for season 2.

What can I say. The children (teenagers) and I love watching Monk in action with Natalie and Julie and also the captain and leiutenant Disher. Every episode is funny and brilliant. Great misteries are solved. Highly recommended.