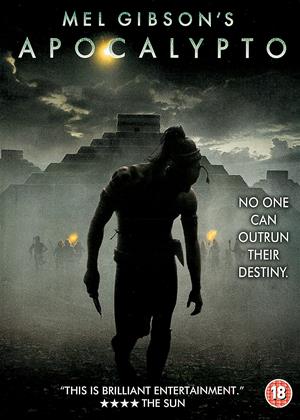 This is a film which is stunning to look at, with its Amazon jungle setting and accurate recreation of Aztec villages and cities. My interest in this period of history was satisfied and I found the whole exploration of Aztec culture fascinating. It is basically a tale of exploitation and enslavement of small communities by the emperor and his wealthy city followers. There is a lot of violence, which can be quite gut churning, but there is also some humour provided by the relationships between the hunters in the small communities. The sacrifice scenes are pretty horrific, as is the destruction of the village communities by Aztec warriors. I think it could have been edited more carefully to avoid the excessive number of scenes involving people running through jungles. However, it is ultimately an interesting historical and cultural drama, with an underlying theme of bravery and loyalty.

I usually hate mel gibson's work - 'braveheart' is one of the worst, not to mention inaccurate, films of the last 20 years - but this film is sublime! It does, it is true, have some hammy plot twists, but the fact that it is in Mayan and is about that culture make it an excellent antidote to hollywood movies (let's appeal to 14yr old american idiots eh?). Only those who can read and understand complex historical ideas can understand this film - which is probably why some chavvy 'middle-class' morons don't like it. Fine. Go to ikea and bingo and watch jane austen adaptations on the bbc. Leave the real talent to us boys. I LOVED this movie - it is unique.

One of my favourite films - watched it 3 times now - has me glued to the screen everytime. Has subtitles but mainly only at the beginning. I really feel for the characters when I watch this film.

This is in my top 5 ever of any genre. - Apocalypto review by JD

Sometimes you wish you hadn't rated some pretty good films as 5 star when something like this comes along. It should be in the next league. It is not so much the plot, which is excellent, but the acting, the scenes, the cultural detail, the brilliant shots and action which is so much more personal than the the usual dry and overly heroic fight scenes. It is totally exhausting.

Visually amazing and utterly compelling film which tackles the rise of the Mayan hunters into a horrific world of modernisation.

Beautifully filmed with shock, terror, humour and beauty... it's a definite must see which made my film companion and i have a most profound discussion afterwards on how man, through the ages is still fulled by greed.....

best film i have seen in a long time

A film of two halves - Apocalypto review by Tim from London

The first hour of the film was excellent - although as the first reviewer said highly bloodthirsty and indicative of Mel Gibson's obsession with the limitations of the flesh (eg Passion of the Christ). The first set peice when the village is ransacked is impressively staged and a truly gut-wrenching piece of cinema - as are the scenes in the Mayan city (which reminded me of Mad Max 3). Unfortunately the second half of the film does not live up to this and becomes a standard chase film - with ever ridiculous twists and turns.

Apocalypto is a true marvel in filmmaking not because it’s good, ground-breaking, stellar, magnificent, or anything of the sorts; but rather because it’s a very unique experience and perhaps a one of its kind. Granted, there is no other live feature to compare it to, and this is precisely what makes Apocalypto a true wonder in filmmaking that will remain remembered long after director Mel Gibson will, figuratively speaking, pass the baton (to a younger generation of directors). Yes, believe it or not, Mel Gibson has actually directed this film.

Stripped down to its core, Apocalypto is an archetypal tale of the provisional hero who must embark on a quest after which he becomes reborn and saves the cosmos (i.e. brings order to a rather chaotic world). Strangely enough, Apocalypto is playing with this trope here and there, and postulates “the jungle” as the cosmos, and the “Mayan metropolis as the chaos that lies beyond. Hence, the hero must return to the jungle (the known world) to bring balance to the cosmos, i.e. order. Yes this sounds boring on paper, but it’s actually pulled off in a quite clever manner and kudos to everyone involved for doing just that.

In it, Jaguar Paw (Rudy Youngblood) is put to the ultimate test after his village is raided and most of his friends and their wives are captured by another, “urban” tribe. Right from the get-go, we see how Jaguar Paw is determined to persevere until the very end of where this journey takes him: whether that’s the ultimate salvation or an ultimate doom. However, despite being caught like a fish in a net, Paw is a very proactive hero and is on the constant “prowl” for ideas on how to delude his captors and break a free man. Will his efforts lead to fruition?

Apocalypto is also a film about the constant struggle of humanity against the elements and against itself. This is mostly iterated through the ultimate dichotomy between the proverbial rain and the primordial sun (yes I’m stretching definitions here, but bear with me for a second); the sun becomes the ultimate savior of the hero, while the rain (water, mud, quicksand) is the ultimate nemesis against which Jaguar Paw and his closest ones constantly struggle.

The other enemy is other humans: different, yet ultimately the same. They’re afraid of the same potential perils as our hero is, but they choose to subdue them to their will and enact this power upon the masses to subdue them. Not so much different after all, since at the sole beginning Jaguar Paw and his friends were also enacting this “wrath” upon a wild boar during their hunt. The top predator is always the one who has the last laugh.

Ultimately, Apocaypto is a great feature and probably one that will be remembered for a long time to come.