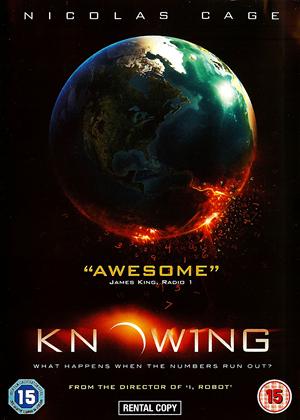 Great special effects. Plenty of bangs for your buck.

The plot is interesting to start with but then becomes boring and predictable. They could have done so much more with this idea, but slipped into cliche and standard story lines.

The end was stomach retching.

Nick Cage does not do the drunken academic at all well. He should stick to what he is good at - whatever that is!

Knowing revolves around the character of John Koestler, whose young son is given an envelope from a school time capsule buried when his school was built. While his classmates have letters and drawings from children who were part of the time capsule project 50 years earlier, John’s son letter is made up of what seems to be a sequence of random numbers. When John studies the numbers it soon becomes clear they are dates which correspond with major world disasters throughout history, and it soon becomes clear there are dates listed which predicted disasters after the letter was written to the present day and dates which could predict future events. I was pleasantly surprised by ‘Knowing’; despite the many average reviews I thought it was a pretty good sci-fi action thriller. The plot moves along at a decent pace, the special effects were decent and the story holds your attention throughout. For me, the only things that let the film down was lead actor Nicolas Cage who was wooden, unbelievable and really not suited to this kind of film and a few silly plot holes. Those criticisms aside it’s well worth a rental.

Knowing is another memorable science fiction adventure in the arsenal of Nicolas Cage's CV of wooden performances. Flawed and to put it mildly complete and utter nonsense, its either an enjoyable romp or completely nuts depending on your point of view. Just suspend your belief and try to follow events through the bad CGI and wooden plot. We've had a few of these number based thrillers such as Number 23 or disaster predictions, often starring Will Smith. Best seen on the big screen with a huge sound system Knowing is harmless fun however after giving us Dark City, I expected more from Alex Proyas.