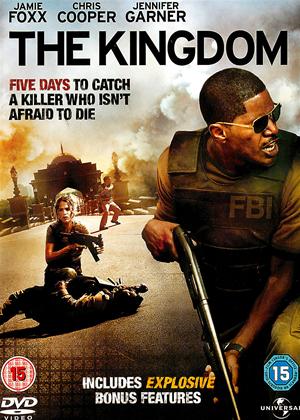 Reviews (3) of The Kingdom

The film starts with a terrorist attack in UAE claiming the lives of hundreds of Western families and locals. Jamie Foxx plays an FBI agent sent to The Kingdom with his team to investigate and assist the local Police in finding the perpetrators of the attack. There are frustrations caused by political manouevring and culture clashes. An interesting exploration of the differences in these cultures which leaves you thinking about how they can ever co-exist peacefully while some people hold certain beliefs and prejudices. Excellent film with modern storyline, good script and strong performances. The camera work adds to the excitement of the film and the confusion.

I was so dissapointed with this nonsense. Americans save the world, again yawn! Politaclly, socially and culturally incorrect, gun toting crap and US bravado that only serves to made the rest of the world despair at the bullshit they propogate.

Don't bother- unless you regularly hold long and diverse conversations with your goldfish.

Exciting, action-packed movie about the paradox of Saudi Arabia - The Kingdom review by PV

Although occasionally resembling The Fantastic Four, with all-American and achingly diverse (woman, tick; black lead, tick...) cartoon superheroes saving the world and not suffering so much as a scratch whilst all the natives around them fall like flies, this is a well-made and genuinely exciting film that will have you on the edge of your seat. The action and bomb sequences are impressive and startling, in all ways, and the script keeps you guessing. Real adrenalin here.

OK, so it's an action movie and follows the tropes of those. But this has more - a thoughtful consideration of the paradox that is Saudi Arabia. That is why I award 4 stars to this. A couple of laugh out loud lines too.

The ending is particularly poignant, and unusual for an action movie; this is so much more than good guys versus bad guys.

And the first 5 minutes is perhaps the best potted history of Saudi Arabia ever put on film, which explains clearly the pact made by the Saud family and the Wahabi Islamic extremists (who want to destroy all books, all images, everything except the Koran). I doubt very much devout Muslims or Saudi nationals will be fans of The Kingdom, however...

After watching this, I'm just glad I never took that teaching job in Saudi Arabia (despite the money...)