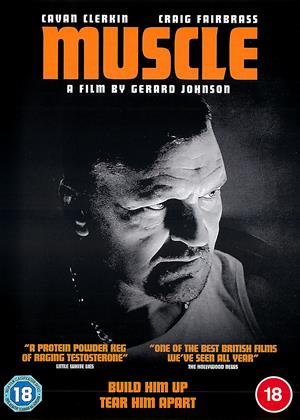 Director Gerard Johnson's 3rd film is his best ( the first two Tony and Hyena are also very good). Centring around male mental-health, toxic masculinity, steroid abuse, and weight lifting, this is an electric and very scary film. Starring Craig Fairbrass in a career best as the personal trainer from hell, you can't take your eyes off this. The lead Cavan Clerkin (new to me) is very assured as the poor guy who falls under his trainer's spell when his life takes a turn for the worse. Recommended but it is very, very dark and relentless.

I'd seen Hyena many years ago, after it got very good reviews. I liked it because it showed a very different side to the law & also was not afraid to go to very dark places and give us characters who, whilst they were detestable, were also fascinating to follow. Another trait of Gerard Johnson is his ability to get incredible performances from & to attract amazing actors to his films, and this continues with Muscle.

The film is about a down-on-his-luck guy called Simon who is slowly sinking into nothingness and irrelevance. This all changes when he gets taken under the wing of the enigmatic Terry, played by Craig Fairbrass. What follows is about how far down you can sink, whilst thinking that your life is actually going forward and you are making progress.

It also is very clever to make a mockery of a certain element of "Gym culture," which shows how underneath all the muscle and "power," there are deeply lost and misguided people, although mainly men, who make terrible judgements and live in absolute chaos.

The performances are what make this film stand out and elevate it into so much more than you would expect. Craig Fairbrass in particular is the face you have seen before on a hundred straight-to-DVD schlocky mis-fires, which are all terrible and tell basically the same story with as much gratuitous violence as possible. But here he is a complete revelation, showing a great range, along with the presence which before was only used as the one-note image to put on the cover of previous film poster. His character of Terry is a guy who on the surface is un-fearing and confrontational, but in smaller moments is shown to be as weak and scared as the people he so readily mocks.

Opposite him, Cavan Clerkin is also sensational, not only for the journey and arc we go through with him, but also for his Christian Bale level of commitment to the role. His physical transformation from meek and portly office worker to musclebound and thickset gym addict is totally believable. His chemistry with Fairbrass is also totally authentic and real, looking as naturalistic as it's possible to be.

The choice to shoot in black and white is one which many people may think is a gimmic, but actually really works well and fit the tone of the film perfectly. Likewise the soundtrack also beautifully works within the story.

My only issue with this film which prevents it getting 5 stars is that towards the end, it does start to run out of steam and the events become so far-fetched that the credibility is stretched. But the journey you go on is well-worth the watch. I hope that both Fairbrass and Clerkin are able to get more roles like this, which showcase their great talents.

Craig Fairbrass, whether playing good guy or bad guy, has that persona that he's always simmering on the edge of volcanic violence. In Rise of the Footsoldier (2007) he erupted with frightening regularity, here, in Muscle, he is just as menacing but there's an equally scary restraint to his character. This is the story of Simon (Cavan Clerkin), a Londoner who has relocated with his wife to Newcastle, where he has a boring job and a dull life. He decides to join a local gym in an effort to add some change to his life. There he meets Terry (Fairbrass) who offers to train Simon, who is wary but eventually feels he has found a new friend. When Simon's wife leaves him and returns to London he hesitantly allows Terry to move in as a lodger. But Terry soon inveigles his way deeper and deeper into Terry's life, taking over the house and holding depraved sex parties and Simon is at a loss of how to get free of him. Shot in bleak black and white to simulate Simon's bland life this is a strange crime drama and the testosterone fuelled characters are all frightening and unpleasant. This actually makes the film an unrewarding experience and whilst there's complexities to Fairbrass' Terry he is when boiled down just another violent thug character. There is also some very explicit sex on display here in an orgy scene which actually adds to the grimy, disgustingness of the film. Overall this is worth a look but I found it all too unpleasant to enjoy.