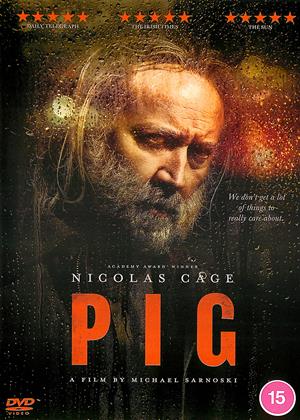 In his feature debut, American director Michael Sarnoski has come up with a highly original piece which is part revenge tale, part character-study, part satire on the meaning of value and social status . The result is certainly a bit hit-and-miss but is nevertheless gripping throughout.

The comparison with John Wick is an immediately obvious one – a brooding loner retired from the outside world has his beloved pet taken from him inspiring him to go on a single-minded quest to find what was stolen. Curiously, Pig also comes hot on the trotters of The Truffle Hunters, a romantic documentary about mushroom digger-uppers and their dogs set in Northern Italy. In terms of tone and form, Pig and The Truffle Hunters couldn’t be more different, but it’s a rather neat coincidence that in being released so close together, each offers a strange emotional juxtaposition to the other. Visually, too, Pig has more in common with The Truffle Hunters, its early scenes in particular awash in earthy brown tones and close ups that unify both Nicolas Cage's Rob and his pig’s perspectives and their relationship with the land.

Cage starring as former chef turned truffle hunter is the big draw here; brooding and contemplative, Cage gives a haunting, captivating performance, each encounter on his quest to find his pig layering pathos upon tension. Violence hangs in the air of every scene, yet with the exception of a couple of eruptions, it remains resolutely out of frame - indeed, Rob is like an anti-John Wick: just as relentlessly single-minded but with his pain turned inwards, not out.

Rob's quest brings him into the purview with the lower and upper echelons of Portland society, and he has more than a few pithy observations to make about the hypocrisy and pretension of the society he has shunned. In one of the film’s most effective scenes, Rob destroys one of his former sous chefs, now running a fancy but vapid restaurant, by reminding him of his former dream of running a pub. Later, in Pig’s emotional climax, Rob confronts the person responsible for the pig theft by simply cooking him a meal. Bloody retribution is hinted at but ultimately withheld, denying us the easy catharsis that screen violence often denotes. True catharsis comes – if at all – not through the barrel of a gun but from Rob’s ability to see through his adversaries .

Perhaps the film ends up being less than the sum of its parts, as it were, but it's a thoughtful and beautifully crafted piece.

Pig, contrary to how the premise is viewed, is not John Wick with a pig instead of a dog. It may seem that way at first. After all, Nicolas Cage is known for eccentricities and is no stranger to action pictures. Thankfully, this is not the case with such a film. This is not yet another John Wick clone and manages to be something so much more, creating a chilling and cathartic effect of one man who seeks revenge not with guns but with words.

That may sound corny but hear me out. Cage plays Rob, a hermit living as a truffle hunter in the Oregon wilderness. He keeps to himself and lives a quiet life. He had a wife but that life is behind him. His dreary days are spent supplying truffles to those who want them. His pet pig helps him out but the pig mostly provides comfort. That comfort is shattered when Rob finds himself attacked by mysterious men and has his pig kidnapped.

Around this point is where one might expect Cage to go violent in his quest for revenge. But here is where the film thankfully doesn’t falter and finds something more. Rob does indeed go on a quest to retrieve his pig but more through questioning as though he were in a somber detective drama. He tries to connect with others he once knew and associated with, slowly getting closer to finding his pig.

This bleak tone works rather well, especially with a script where Cage just shreds people to pieces with his way with words. One of the absolute best moments of the film happens when he confronts an old friend who has opened up a bistro instead of the pub he wished for. Rob guts this seemingly content chef by being frank about the phoniness of succumbing more to the whims of the community than doing what he loves. His words are so piercing that even the hardest smile can’t block out the emptiness one feels when their life seems so wasted. This tactic not only gets Rob the information he needs but showcases just how such an honest life he has lived can shred those who live by lies.

Pig proceeds in a rather engrossing way that becomes less so about the simplistic goals of attaining a big and more about coming to terms with the past. Rob finds himself trying to relive the past through various means, be it the pig he adores or a cassette tape of a personal tune he favors most. Rob soon realizes in his journey that he can’t keep living with this retrieval of nostalgia but that he can do so through his philosophical methods of finding non-violent means of ripping others to bits. The ultimate resolution of such a film is so deeply sad yet bittersweetly fulfilling about contemplating mortality and memory in a very profound way.

For what Pig sets out to be, it is such a fantastic film. Cage’s performance is absolutely brilliant echoing his more toned-down and towering performances of films such as Leaving Los Vegas. The skill on display from first-time director Michael Sarnoski is astonishing, especially for his debut picture. It’s a picture that has just about everything to be a somberly sweeping drama that finds so much to ponder in its portents of the past. Yes, that’ll do, pig.