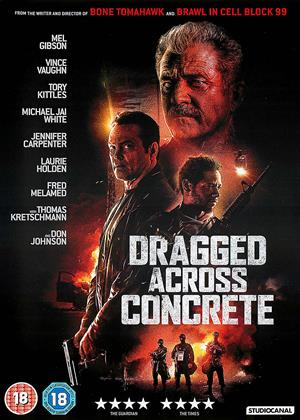 Reviews (10) of Dragged Across Concrete

Any film starring Mel Gibson as a crooked cop spouting right wing racist rhetoric is bound to be controversial, but as director Craig Zahler points out, not all films should have appealing characters in the lead or be morally straightforward and in these days of big blockbuster fair at the cinema this is an increasingly rare thing. I really liked Dragged Across Concrete, it was very tense, really well shot, combining elements of cop thriller, exploitation flick and horror to create something unique and totally messed up! Like Zahler's other films Bone Tomahawk (which I love) and Brawl on Cell Block 99 (which I didn't like so much) it takes it time, building tension and character, It's 2.5 hours long but didn't feel like that to me. Gibson is very good too. Definitely not for everyone though. :-)

9 out of 12 members found this review helpful.

I cant really think of many films its simular to but maybe Heat without the big gun battle.

this film has action spread throughout. its very violent and pretty gory in parts.

its the sort of film you never really know whats going to happen next or whos going to die so it keeps you on your toes watching.

If a movie is going to ask me to hand over 2hrs and 40 minutes of my life to it then it had better be good. Dragged Across Concrete is nowhere near good enough for that scale of transaction. There is a scene in the movie where Vince Vaughn is eating some crunchie thing ( for some inexplicable reason the film company is so proud of it it appears in the trailer - but in much shortened form ) that just goes on and on and then in what is presumably a knowing wink to the audience concludes with Mel Gibson saying 'he has been waiting hours for that to finish' - not only did I feel the same about the scene I felt it all the more about the entire movie. Give it a miss.

This I would consider up there with classics like Reservoir Dogs.Jackie Brown etc..A very unique style of presentation & intriguing to become involved with the excellently played characters Mel Gibson & his side kick Vince V.perfectly cast & so very convincing performances..the 2 & 1/2 hours flew by..highly recommend this movie .

Not sure why this film has so many good reviews. For a start its nearly 3 hours long and most of that time is spent on endless pointless chat between mel and vv in cars. It drags badly is really dark grim and violent. I would avoid.

This is a dark and very violent thriller featuring two police officers who decide to go it alone in the pursuit of financial 'compensation'. In so doing, they tackle an extremely violent gang of hardened criminals.

In some ways, the story is over the top and there is a certain amount of gratuitous violence that is quite shocking. The movie has also been criticised because it portrays 2 police officers who are not PC, to say the least. (A parallel has been drawn with Mel Gibson's real-life problems...)

What is appealing, however, is that absolutely all the characters in the film feel very real, and the acting is memorable (but for the near-robotic bunch of killers dressed in ninja outfits). You feel they could exist and their stories are entirely plausible. This makes the story interesting and is quite rare, nowadays, in that kind of thriller.

Kept in the dark - Dragged Across Concrete review by DW

Cannot understand why films like this are filmed in semi darkness which takes away any enjoyment of the film.

Cannot see the characters and have to guess what action is taking place.

Unfortunately what I could actually see was awful anyhow so cannot recommend this film.

Film making at its best. - Dragged Across Concrete review by SB

I’ve sat through many a film, this one was right up there. It’s not one you would watch over and over, but while it was on they had me 100%. Really.

A strange film I thought. Some good action scenes, an adequate plot and good direction, except that the film kept drifting off into nothing scenes and as a result it kept losing its momentum. Still, eminently watchable on the whole.

Step Outside The Box - Dragged Across Concrete review by SpecOfSand

Clever, entertaining & quite well thought out.

Everyone has an opinion & is entitled to it & I understand this offering is not going to be for all but don't diss it as rubbish when it so obviously is not.   My family thoroughly enjoyed the humour, twists & turns & general acting on show.   I can only say we rate it fairly highly, as others have, give it a go, you might be surprised.

At a slow burn of 2½ hours, I was expecting Dragged Across Concrete to either be one of two action pictures. Either it’d be bogged down in too many twisty subplots thrown at the screen or it would linger like the longest of Nicolas Refn productions. I was pleasantly surprised that S. Craig Zahler makes sure that his slow burn of an action picture burns bright.

We’re introduced to some troubled and unsavory characters. Brett Ridgeman (Mel Gibson) and Anthony Lurasetti (Vince Vaughn) are classic dirty cops, aged figures of an era long gone. They work the streets trying to tackle the tough cases with as much grit as they can muster. They break into the house of a drug dealer and arrest him with exceptional roughness. They then enter into his bathroom to discover a Latina woman showering, insulting her dryly that they don’t speak Spanish when she speaks perfect English and refuses to grab her a towel. Later, they go to a diner and are mildly angered by pop music being piped into the speaks, unable to determine if the singer is a man or a woman.

A problem arises. The two cops are given leave for their actions. Hard for money, they decide to find a heist that will go down, track the criminals, and take the loot. Their mission collides with others. The robbery is being pulled off by friends Henry (Tory Kittles) and Biscuit (Michael Jai White). They work alongside some masked associates for a bank job that will not end well for either the hostages or the robbers. One of those hostages is Kelly (Jennifer Carpenter), a struggling woman just trying to work to see her baby. Not much works out for any of them in this gritty picture of immense violence and cruelty.

Zahler directs this picture in a somewhat unorthodox manner, taking a fairly familiar story of countless direct-to-video action movies and giving it thoughtful pacing. He lingers on scenes of the uncomfortable to make us extra put off by the horrors of trying to survive under a capitalist system. Where this seems most blunt is in Kelly’s tearful plea to not go to work, wanting to be more with her baby than suffer through a desk job. It’s a scene both maddening and emotional, being very much on the nose. Kelly’s return to the office is treated with a similar sense of David Lynch-like conversations that feel both mundane and exaggerated. It’s this drawn-out nature that makes the exceptionally gory violence pack an extra punch and surprise.

I really do appreciate that Zahler draws the film out to such a long length, letting the audience appreciate the crafting of the scenes. Gibson and Vaughn play characters that could easily be turned into cartoonish villains that babble on in all manner of PC culture ruining the world and criminals being worse than they are in their actions. Indeed, we do get some antagonist dialogue but only in short bursts as an uncomfortable silence falls on the picture. We’re meant to identify most with Henry as the underdog just trying to the right thing, even though he goes about it with all the wrong actions. He’s deeply flawed but in a world of other flawed and tragic characters, it’s easy to like him most, even if he only melds firmer into the sloppy system that required heists to survive in the first place.

I was on the fence about Dragged Across Concrete for a film that falters between either being a vicious exploitation picture or an elongated and artful neo-noir. Perhaps it’s both. What I can say for certain is that the picture held my attention greatly as someone who has become easily burnt out on the heist genre. This is that extra shot of vigor to showcase that films about men robbing banks can still have some flair and grit.