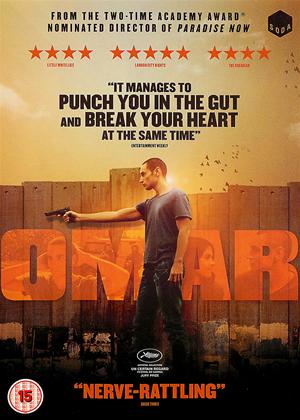 Superb. Hard to watch, but subtle, this film is an excellent story of the pressures that can be put on individuals and where that leads. the best film I've seen in years.

Brillant! really enjoyed it and well worth a watch, the acting was good and the storyline very enlightening of the situation on the west bank

What a remarkable depiction of the stresses of the occupation at a human level. Brilliantly evokes the circumstances which diminish the lives of occupier and occupied and gives a real feel for the day to day experience, leaving the watcher to wonder how much tragedy there must be before a solution is found. Some truly fine performances and a lead character with real nobility.

The story of Omar is one that works on several levels. It’s a romantic drama of one man’s love separated by a graffiti-covered wall in occupied Palestine. It’s a tense thriller with plenty of running and gunning chases that sneak up on you without warning. It’s an informant piece of one individual torn between his loyalties. Any one of these stories could encompass a feature length movie, but all these elements coupled together form an intense and personal experience unlike like any other Israeli movie.

The title character spends his days fawning over his one love Nadja and joking around with his childhood friends, Amjad and Tarek. They sit around doing impressions, make some jabs and maybe use their gun to shoot at some dead electronics out in the dusty fields. But his chums take on a different brotherhood at night when they transform into freedom fighters, silently picking off soldiers from a distance. One night after a successful sniper job on an Israeli soldier, Omar and his comrades disperse and ditch the evidence successfully. And, yet, undercover agents still manage to track them down. After a frantic scurry through the alleyways and streets, Omar is captured and sent to prison. While interrogated, Omar admits that he will not confess as if he were a stone-built soldier.

The truth is that Omar is weak. He is frightened, emotional and the operation to snipe a soldier was more of random aggression than a politically-motivated assault. Not being a soldier entirely dedicated to the cause, Omar conforms to the request of Agent Rami to work undercover and handover Tarek. Hoping to remain aloof, Omar tries to play both sides. His mind is more preoccupied on his love for Nadja which slowly deteriorates over time. Their love concealed behind corners and passed notes takes its toll with the increase of activist strategies and the military watching over Omar like a hawk. Poor Omar just wants to be with his love and believes that going with the flow of both sides can keep him balanced.

The tragedy of it all is that it doesn’t work out for our protagonist. We know it and perhaps Omar knew it in his heart. The tone of the film doesn’t shift as heavily into the politics or religious aspects of the Palestinian occupation setting, making it far more of a personal experience than a national expression. We are merely taken for the ride inside Omar’s head with how he views this current conflict and how it affects his own life. He’s not deeply concerned for specific freedoms, not fully devoted to either side. He let’s himself be played by his friends and the authorities because he feels helpless. He’s not a freedom fighter or a spy; he is just a hopeless romantic who happened to fall into those professions.

Adam Bakri plays the role of Omar perfectly invoking a subtle level of fear beneath his towering and stoic appearance. He embodies the human spirit that seeks the pleasures of love, but also the unfortunate consequences of simply going with the flow. It is Omar’s almost benign approach to the struggles of the area that result in his world collapsing. This is a world where you have to choose a side. The few that don’t want to play end up sacrificing their souls to live another day. The memorable speech from the 1976 film Network comes to mind where reporter Howard Beale states that we’re content with our lives as long as everyone else leaves us alone. But Baele doesn’t want to leave us alone as he wants us to get mad as it is the first step to solving a problem by reacting and acknowledging it. Omar does not get mad and the price is a bitter pill.

Omar was directed by Hany Abu-Assad (Paradise Now) and is incredibly well shot. Such memorable visions include the tall separating wall Omar scales and the tight nooks of the town he scurries through to avoid capture. I especially appreciated how there are several chases through the streets and not a single one feels shaky or bumpy with the camera. We get to see every inch of these alleys clearly with detail as opposed to a fast blur. I think the one shot that left the biggest impression on me was a moment where Omar attracts the attention of the wall patrols. They force him to stand on a rock and then laugh about it off to the side while they with each other. Omar gets off the rock demanding to know their reasoning, is smacked with a gun and forced to go stand on another rock. It’s a painful reminder that a quiet society of followers can be forced into anything foolish and punished for not playing the blind idiot.