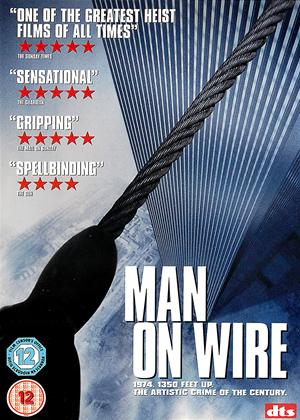 Gripping Stuff - Man on Wire review by The Millbrooker

What to say about James Marsh's 2008 telling of Phillipe Petit's derring-do in the high wire "Man on Wire"? I guess that almost everyone will be aware (thanks to massive publicity) that the film documents the illegal wire-walk undertaken by Petit between the twin towers of the World Trade Centre in New York in August 1974.

It's received widespread critical acclaim, and deservedly so. But is it cinema? I rather thought not; it's great TV and a thoroughly entertaining documentary, but I didn't reckon it was great cinema. Let's put that minor gripe aside, and look at what the film tries to achieve.

As with most documentaries that I've seen, there are plenty of people talking to camera; some engagingly and some rather less charismatic. The principal protagonist in the escapade being commemorated - Monsieur Petit himself - is lively, entertaining and utterly barking. He was quite evidently an intense young man back in the 60s and 70s, with the drive, skill and creativity to realise his dreams of performing in the most outrageous spaces.

Before the twin towers "walk" he had performed similar stunts on the Sydney Harbour Bridge and between the bell towers of Notre Dame in Paris; both of these walks are shown as part of the film and drew plenty of comment from one of the friends with whom I watched along the lines of "I couldn't do that". How true.

We are led through the planning stages of the feat over New York; how to gain access to the site, how to set up a wire upon which to walk - all of which resembles nothing so much as a heist plot.

Eventually Petit ventures out with nothing between himself and the plaza beneath but 1350 feet of air. Sadly there is no film coverage of the event within the documentary only still photography, but the sense of wonder and enchantment is almost palpable nonetheless.

Petit spent about 45 minutes between the towers, walking, dancing, lying down, kneeling on the wire. The one place in the world where no one could reach him or touch him. The police waited on either side, but whilst he remained on the wire he was the most free man on the planet. Even without moving images, that sense of pure and unadulterated freedom is an awesome thing to watch.

After the walk, Petit is led away in handcuffs which he describes as the most dangerous part of the whole exercise (and possibly with good reason).

The film manages to work on another level altogether as well. Not only do we get entertained and awed by the spectacle, but we get a subtle and fascinating insight into one man's psyche. How his obsession and, let's be frank, self-centred nature both freed him to achieve his dreams and drove his friends and associates to eventually withdraw from him.

So a definite recommendation. It's not cinema per se, in my 'umble, but it is a tremendous ride.

I didn't know what to expect when renting this film. I heard great reviews from it and thought I would give it a go. I've watched everything and anything to do with the Twin Towers, and I guess that's what swayed me a little to renting this. However I was instantly captured and put into this wonderful story.

This film follows the undeniable amount of planning that Philippe Petit put into his dream. From a young age, he'd been taking his passion to the next level. The film is inspiring, despite the breaking of the law, it's jaw dropping to watch and impossible to look away when Petit is dancing around on a single piece of wire.

Brilliant archival footage and photographs. The reconstructions were also really helpful in picturing the whole story from Petit's point of view.

Lots of French folks being interviewed and little clips of these dotted throughout. Unfortunately all the action had happened decades before and so there was no film of the main high wire walk. Some stills gave an impression of how scary it might have been. As poor as the content was, it seemed to keep a certain interest going.

A joy - Man on Wire review by CP Customer

Thoroughly recommend this documentary which blends interviews, photographs, historical film and recreated events with ease. More than just a man on a wire, this film captures the dream of a young man and his pursuit of it. The incredible planning involved was a surprise and the team on each event had alot of luck!

Uplifting and moving - Man on Wire review by MI

At first I thought 'did this event really take place ?' because it seems so surreal. But through archive footage and mock-ups you are hypnotically drawn into the tale of how it was done. Petit is extremely charismatic and you will be hooked.