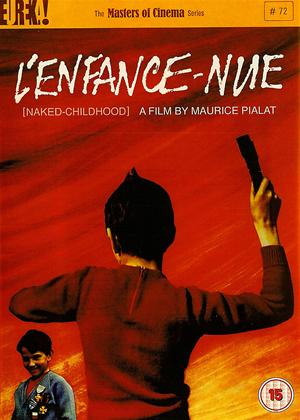 What Are Little Boys Made Of...? - Naked Childhood review by Count Otto Black

This major landmark in cinematic realism asks what society should do with children who, through no fault of their own, are too disturbed to adapt to normal family life, and then answers the question realistically by not answering it at all, because this isn't the kind of film in which the initially misunderstood kid from the orphanage eventually becomes a hero and is adopted by a billionaire.

What makes it work is mainly the superb performance of Michel Terrazon as the problematic François. Casting child actors always requires a fair bit of luck, but they certainly got lucky with this boy, who plays François as if he's a semi-domesticated feral cat who has sort of come to trust the nice lady who feeds him, but will never be entirely happy around humans. Abandoned by a mother who, judging by what little we hear about her, couldn't even look after herself, and passed around by social workers from one temporary foster home to another, François desperately wants to belong somewhere, but past experience tells him to expect betrayal and rejection, which of course becomes a self-fulfilling prophecy.

Terrazon manages to convey François' complex character perfectly, from the scenes with his new grandmother, the only person who accepts him unconditionally, around whom he's a charming little boy any couple would be delighted to adopt, to the way he acts when his need for acceptance throws him in with the wrong crowd. And since this movie pulls no punches at all when it comes to portraying the thoughtless amorality children are capable of, especially when they run in packs, some of the things he gets up to are genuinely disturbing and completely inexcusable. But they're as believable as his guilty attempts to make amends by doing too little, too late.

It's not a flawless film. Many of the cast aren't professional actors, and you can often see a distinct transition between them improvising as themselves, and then going a bit wooden when they have to do a scripted scene. And the slice-of-life format, with no real beginning or end, though plenty of middle, won't please everyone. But it's a very powerful and sincere piece of work with the courage to ask more questions than it answers. And it's utterly devoid of that sickening Hollywood cynicism which resolves every problem in some wildly improbably way so that the audience can go home feeling smug about the perfect society they live in.

Rather in the Ken Loach style of film making, where things are certainly not right in society, this 60's tale set in northern France follows the progress, or more like the decline of a young boy, through the poor cards that people have forced him to play with, to react against the life he has been dealt. What makes the film so astounding is that the acting is so brilliant from the whole cast, especially from Francois, the boy, and the old couple who take him on to be fostered, that you think you're watching a documentary. The director, Michel Terrazon, helped by his producer Francois Truffaut, states that the story is based on his own upbringing, which of course may have made the film so realistic to watch. A brilliant film, which certainly ought to have been seen by more people than apparently watched it.