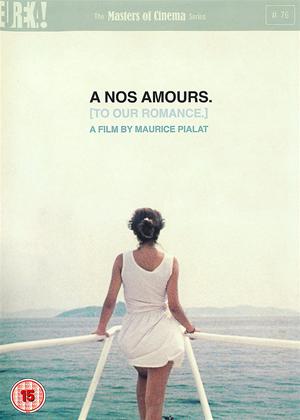 Reviews (1) of To Our Romance

I think the conclusion I have come to after watching this is that it is a film with plenty of merit but maybe just not quite to my taste. It has good performances, particularly from Sandrine Bonnaire as Suzanne and from the director Maurice Pialat as her father. It reminded me superficially of a more recent French film I watch, Jeune et Jolie, as both deal with the turbulent sexual awakening of teenage girls. I definitely think this is a superior film, with warmth, empathy and humour which, so far as I recall, were rather lacking in Jeune et Jolie.

There are plenty of interesting themes/ideas here: there is the coming-of-age/sexual awakening aspect; extremely dysfunctional family dynamics; how/if sex and love can be combined; a touch of Jung's Electra complex; what people are willing to sacrifice to attain money and/or fulfil ambition. I could go on - yet for all this, I somehow couldn't find a way in to this film, something to really grab hold of and identify with. Maybe it is always going to be difficult for me, a nearly-forty-year-old man, to fully engage with the emotional turbulence of a teenage girl, but there is also something in the style of the film that kept me at arm's length. It's a restless film, going off at tangents and with many narrative ellipses - this is not a criticism, because given the story being told here, the form is suited to the content - but I did find, particularly towards the end when the narrative seems to jump forward in time almost every five minutes, that I was spending more time trying to work out how much time had passed and what was going on in the new timeframe than I was engaging with the story or the characters.

I suppose in the end my conclusion is that I haven't really come to a conclusion. I have my particular tastes, like everyone else, and I think that for all its merits A Nos Amours currently falls just outside of them. It wasn't wasted time by any means and I would happily watch another of Maurice Pialat's films if one happens to come my way, but I wouldn't actively seek them out.