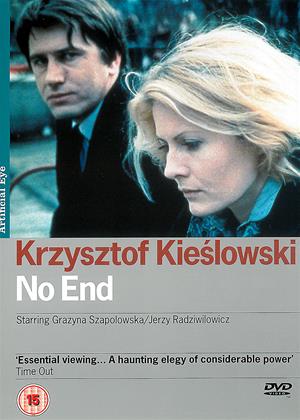 Synopsis:
The ghost of a young lawyer, Antek (Jerzy Radziwilowicz), observes the realm of the living in the Poland of 1982, during the country's period of martial law. Thanks to the help of his widow, Ulla (Grazyna Szapolowska), one of Antek's former clients - a worker accused of being an opposition activist - will be now defended by one of Antek's colleagues - an older, experienced lawyer. But Ulla herself finds life without her beloved husband increasingly hard to cope with and must make a difficult choice.
A highly original blend of ghost story, political drama and meditation on the nature of love, 'No End' was Kieslowski's first collaboration with writer Krzysztof Piesiewicz and composer Zbigniew Preisner, with whom he would continue to work with on all his subsequent films.
Actors:
Grazyna Szapolowska, Maria Pakulnis, Aleksander Bardini, Jerzy Radziwilowicz, Artur Barcis, Michal Bajor, Marek Kondrat, Tadeusz Bradecki, Danny Webb, Krzysztof Krzeminski, Marzena Trybala, Adam Ferency, Elzbieta Kilarska, Jerzy Kamas, Hanna Dunowska, Jan Tesarz, Andrzej Szalawski, Jacek Domanski, Katarzyna Figura, Jacek Hilchen
Directors:
Krzysztof Kieslowski
Producers:
Ryszard Chutkowski
Writers:
Krzysztof Kieslowski, Krzysztof Piesiewicz
Aka:
Bez Konca
Studio:
Artificial Eye Film Company Ltd.
Genres:
Classics, Drama, Romance
Countries:
Poland

A feature from the Polish period of Kieslowski, before French exile and obviously before his ascent to cinematic legend status, after the Three Colours Triology.

This movie sees some of the director's elements in play, in particular the "supernatural" element. Arguably these are more effective in a film such as The Double Life of Veronique (admittedly one of my favourite movies of all time), but its interesting to see how the director's ideas have developed or been applied differently.

In political terms, it's interesting to observe the pessimism or even fatalism of characters here. It's from 1986, I believe, and it seems that reforming characters - including Solidarnosc figures - only see compromise, subjugation and defeat in Poland at this moment. Of course we are well aware that the moribund system is about to crumble - as the personages (and the creative people behind them) are not aware. So from that angle, it demonstrates that despair can be misplaced. A message perhaps to the Russian people in 2021. Let's see.

Grazyna Szapolowska is superb here. The soundtrack by Priesner (forgive my spelling) is rather dirge like, but I still enjoyed the sound and again it prefigures more confident work to come.

Definitely a piece in the Kieslowski puzzle, for admirers.