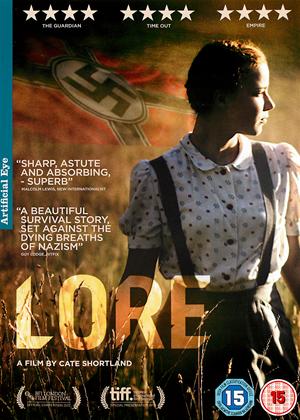 Shattered minds in a shattered country - Lore review by WS

A film largely overlooked by critics as well as cinema-goers. When we think of World War II aftermath and survival films we tend to think of big cities (Grave of the Fireflies, Germany Year Zero), but this is all about rural Germany. Notable in that it's not only about the struggle for survival in a war-ravaged country, but about the profound psychological damage done to children living under a totalitarian regime. Children and adults alike have been deeply affected by 12 years of brainwashing . . . but haven't completely lost their humanity. An exceptionally sensitive portrait of a war-ravaged country that makes excellent use of the rural locations.

Set in the immediate aftermath of World War II, the Nazi government has fallen and its high-ranking officials are forced to flee in the face of Allied arrest. After their loyalist parents disappear, five siblings must traverse the ruins of Germany in hope of reaching their Grandmother in Hamburg.

Following the fall of Germany to Allied forces Nazi parents frantically clear their luxurious home of valuables, readying for an escape. Their haste relentlessly, taking time to dispose of the family dog (within earshot of their daughter) but failing to ready their children in time for the escape.

Eldest sister Lore (Saskia Rosendahl), already supplanting the parents in their roles is forced to take charge of her siblings and guide them across war torn Germany. Having lost their money, status and power, the family lose almost everything else just as quickly. The children’s journey across the country sees them deserting suitcases full of clothes and possessions, simply out of necessity, whilst even the strangers they encounter refuse to help them because of their background.

The lone sympathetic figure to encounter the children comes in the form of mysterious Jewish concentration camp survivor, Thomas (Kai Malina). At first, he casts an intimidating presence, having attempted to seduce Lore late one night. He further scares the children by following them on their journey uninvited. However, he soon redeems himself, acting as their protector at a moment’s notice. Not to mention, his status as a Jew amongst Nazis creates a fascinating divide amongst the group for a long while.

Though the story of the children is a rather heart wrenching one, filled with moments where their vulnerability is palpable the narrative itself never quite comes alive. Though characters are well presented their journey is one of separate incidents rather than of overarching emotion; despite this the faithful recreation of a period usually glossed over is absolutely fascinating. Adaptations often get so caught up in the actual conflict of the World War, they forget about the common people affected by it.