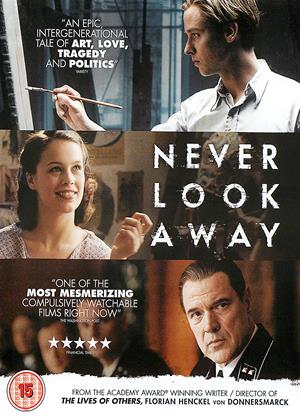 Reviews (7) of Never Look Away

Von Donnersmarck concentrates mainly on the post-War consequences for German society, and for the world of visual art. The narrative is loosely based on the early life of Gerhard Richter, who has gone on to become one of the world's most feted artists.

The various strands of the film are beautifully brought together in the final section, where 'Kurt' achieves a breakthrough in his artistic technique, developing the blurred memory effects of Richter's magnificent paintings from that period.

This might have been a five star review, but the portrayal of the central relationship between Kurt and Ellie is somehow not as energised as the other parts of the film.

Watchable but forgettable - Never Look Away review by PD

'Never Look Away,' (for once, the English title is more apt than the original ('Werk Ohne Autor' / 'Work without an author') follows protagonist Kurt (played as an adult by Tom Schilling) from his boyhood in the 1930s to his career breakthrough 30 years later. The film traffics in all kinds of thorny, ambiguous material: family secrets, psychological misdirection, the sometimes uncanny harmonies between artifice and reality, and, as with Von Donnersmarck’s first feature, 'The Lives of Others,' unpacks some of the moral baggage of the former East Germany. Not quite a biopic, this one hovers between psychological drama and period romance — and tries to achieve a similar blend of ethical ambivalence and excitement. It's generally engaging, partly because von Donnersmarck possesses an old-fashioned Hollywood showman’s sensibility, partly because of the rich, striking images (for which Caleb Deschanel received an Oscar nomination) but perhaps mostly because of strong performances from the cast. Schilling has a sensitive, sympathetic demeanour; he rarely gives anything away verbally but communicates effectively just by a look. As a child (played by Cai Cohrs), he is initiated into the mysteries of art by his aunt Elisabeth (wonderfully played by Saskia Rosendahl), who takes him to the Nazis’ exhibition of 'Degenerate Art,' where the two find clandestine inspiration. When Elisabeth is diagnosed with a mental illness, the full cruelty of the regime reveals itself. The links between Kurt and the man responsible for this atrocity and others like it, Carl Seeband (played with great panache by Sebastian Koch), become the focus of much of the rest of the film; what keeps us guessing is when, how or whether Kurt will learn the truth. Seeband’s magnetism and his transparent evil undermine a potentially central line of moral inquiry in the story, having to do with the ways Nazism embedded itself in ordinary German life.

But, but ... unfortunately, despite its considerable length (we're kept for 3 hours, and it felt like it), the film largely shies away from depth or difficulty, whilst structurally speaking the relationship between Kurt and his girlfriend Ellie, which should be its emotional axis, is a pallid romance (and one punctuated by some truly awful, cliched film sex — the kind that is supposed to reflect profound feelings through the use of candles and graceful changes of position). And whilst the first section of the film is totally gripping, the following sections rather lack the intensity of the first, and there's far too many doses of melodrama and sentimentality for the film to entirely 'work' given the seriousness of the subject matter, sadly. So all in all, watchable but ultimately forgettable.

Loved this film. A modern german masterpiece IMHO. Real insights into developing as an artist and finding your own individual voice. The acting is superb and it covers an important era in Germany coming to terms, or not, with the crimes against humanity in the second world war. As a doctor I found the ex-SS gynaecologist totally believable, a ruthless psychopath flourishing under both nazi and communist regimes.

The central love story holds the film together. Beautiful and intense film.

approaches to something called art - Never Look Away review by JB

This is a brief comment rather than a review. Never Look Away held my attention throughout, despite its length : the same cannot be said of many films recently...... I though Tom Schillings performance excellent in its slight understatement, and the film's given me a whole new appreciation of Gerhard Richter. I'd give it four and  half - agree, I suppose ,about the lack of develop of his relationship with Ellie but could see why there wasn't room for this in the structure of the movie as a whole. And I will remember it.

This is a classy film which combines some really tough World War 2 civilian drama with art, romance and some real villainy from Professor Seeband (Sebastian Koch), as the Doctor/Father in Law. The film is rather long, but it never drags as the film moves effectively from East Germany to West Germany which allows a new cast of characters and the artistic influences to be brought out. The art is really interesting and the characters and acting are of a very high standard.

Cracking film about Persistence, Art and why history is Important - Never Look Away review by JF

I don't often write reviews any more on here, but this one deserves it _

A great story of self determination, Creativity, Monsters, Beauty and History

To endorse what others have said here, in many ways this is a great film (performances, costumes, cinematography), but in the end I felt it was over-ambitious and lacked focus (runs to over 3hrs). One strand, and the most accessible, is the ex-Nazi doctor (brilliantly played by Sebastian Koch) who becomes a father after the war but who revisits his chilling eugenics on his own family. But the less successful sub-plot is about the integrity of art, under the Nazis and in the post-war GDR. Clearly both regimes wanted art to serve a political purpose and that point is well made, nevertheless the ending seemed inconclusive to me - was abstract art born as a way out? If so, perhaps it is a legitimate historical analysis, just a little hard to make dramatically interesting!

The truth is beautiful and you should never look away from it.

These are the words that the young Kurt hears from his insane aunt amid the Nazi occupation, said while she is nude and cracking a plate over her head just before being hauled off to the hospital. She will later be sentenced to death for the Nazi eugenics program. There’s another interesting talk that Kurt observes from an art gallery tour guide, about how paintings are pointless if they do not enrich the soul, talking badly about all the art on display, arguing that it does nothing to better the soul. Kurt doesn’t care. He loves art and heeds the words of his aunt that will come in handy for growing older.

When the Nazi rule passes, Kurt finds himself older and experiencing a similar euphoria as his aunt about finding and losing the true meaning of everything. His family is worried that he has the same problem as his aunt, burdened with an eccentricity for understanding the world that only a few years ago would have bought him a death sentence. Deciding to dig deeper, Kurt pursues schooling for becoming an artist. But not just any artist, as he wants to embrace the new wave of experimental art forms to find something that will give his exploding mind a chance to be deciphered and expressed. It won’t be an easy journey but one worth pursuing how he feels a stronger connection to the truth when painting something he feels will be genuine.

While attending school, he falls for the beautiful Ellie and she becomes an inspiration for him as the two soon form a passionate romance. But there’s a problem as her father happens to be Professor Carl, the doctor responsible for putting Kurt’s aunt to death. Kurt doesn’t know this about Carl and Carl doesn’t make the connection either. What Carl does know is that he feels this boy Kurt isn’t right for his daughter and not just because he disapproves of the art. He just can’t shake the eugenics work by looking upon Kurt with those same judgemental eyes of the Nazi era, refusing to let that part of him go. But the past isn’t all rosy, especially when it comes to bite him back later.

Never Look Away takes place over the course of forty years and has a lot to say over its three hours. There’s plenty of time to understand how Kurt’s basis for thinking and his perceptions of art were formed to make him favor the wild and weird world of art most out-there. We also get to know the era and feel Kurt’s emotions about the shifting winds of politics, the divide of Germany, and the emptiness of art without meaning, where the betterment of the soul feels hallow among works that don’t carry a genuine nature. It’s also pleasing to see how Kurt’s struggle for himself comes with a developing charm for how he makes love to Ellie and has a blast with his artist comrades. Meanwhile, we see that while Carl may have at once had a compassion for his work, his bitterness breeds underneath without fully coming to terms with his past actions until that shocking and fulfilling moment when all is revealed.

The room to breathe with a film this large in scope allows for an almost light sense of humanity within tragedy, art, politics, and love. I felt as though I gained enough of an understanding that there’s more of a natural flow to Kurt’s hunt for meaning that comes with its own sensations of depression, desperation, inspiration, and passion. And I must admit it was deeply satisfying to see a Nazi doctor have revenge set upon him, not through a vicious slaughter but with art that makes a true statement that shocks the soul. That slow burn has a more satisfying sting amid the film’s grander and broader message about embracing that which we know is honest among those who keep silent.