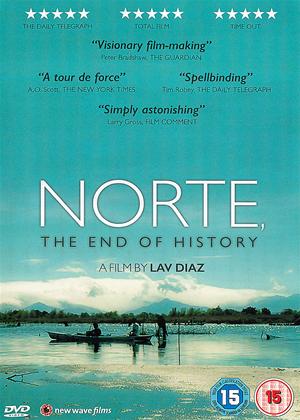 Rent other films like Norte: The End of History

Reviews (2) of Norte: The End of History

One of the great films of our time? - Norte: The End of History review by MH

Slow, beautiful, gripping. Unlike any other film I have ever seen. An intense and reflective variant on Dostoevsky's Crime and Punishment. Not for everyone, perhaps but richly rewarding in all its four hours of length.

A travesty of cinema - Norte: The End of History review by Alphaville

You want to know what’s wrong with arthouse cinema? Try to watch this so-called ‘film’ – a dreadful 250 minute sequence of static, stagey, score-less, tell-don’t-show scenes. You know the kind – longueur after longueur of silences mingled with people yapping away while nothing at all happens on screen. In short, the antithesis of cinema.

Supposedly a Filipino re-imagining of Crime and Punishment, it’s a crime against cinema and a punishment to sit through. On the DVD cover the Guardian’s Peter Bradshaw calls it ‘gripping’ and the Daily Telegraph’s Tim Robey calls it ‘spellbinding’. Some critics should have their licences revoked. Somebody tell them that film is a visual medium. We must stop them now before they encourage more of this deplorable drivel.

Out of the Philippines comes the captivating 2013 film Norte: The End Of History. For 250 minutes (four hours and ten minutes), you are taken on a ride that contains interesting characters, intelligent dialogue, and commentary on the state of Philippine society.

In the span of one day, three lives are thrown into utter chaos, with none able to be the same again. We follow a law student who commits a double murder but avoids capture; a family man who faces the true murderer’s harsh prison sentence; and a mother with their two kids that walk the desolate countryside whilst seeking redemption.

I have to begin with the cinematography by director Lav Diaz. Diaz did an excellent job at capturing the desolate landscapes, which was shown at length in the drawn-out long shots. It didn’t need to use green-screen or other filmmaking ‘cheats’, and was a true capturing of the beauty and bleakness of nature.

Not all films are about car chases, pretty ladies, and shoot ‘em ups. The film’s creators introduce interesting characters, delve into issues not commonly expressed so thoroughly, and wrap-up in not the most happiest way. With it being so long in duration, you could rightly think it drags on, but there is no wasted moment and it all adds to the whole film.

I had never heard of any of these actors and actresses before. Because of this, I was able to see them entirely as the characters, and let them live these lives.

Norte: The End Of History makes its point but loses some momentum and interest when the shots go too long. I understand that it is Diaz’s technique, but when it happens so often over the four hour duration, it starts to feel old.

A backing soundtrack is one of the most over-looked parts of a feature film. In Norte, the use of silence draws immense attention to itself, elevating the film’s atmosphere. We don’t have the music to help us know how to feel about a scene, and instead are forced to contemplate it along with the characters.

For the most part, critic and audience responses are in-line with my review. It has achieved very positive feedback and has won numerous awards (from acting to its technical production).

What I love about film festivals, is that it is the perfect place to find gems like this. It is here that independent films and those from smaller countries can take the stage and show that Hollywood is not the only creator of brilliant films.

For some, it will be too long (and this isn’t even Diaz’s longest film), but it is worth the time. It is also probably best not to read too many reviews from Diaz’s hard-core fans, because their position elevates his interesting work to impossible levels of brilliance.

Will this become a cult hit? I doubt it, but I definitely respect the experimentation and think everyone involved did a great job.