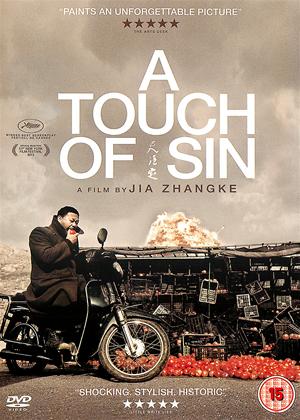 GREAT CHINESE STORYTTELLING - A Touch of Sin review by GF

Chinese Director Zhangke Jia is more used to deipcting the affects of the changing Chinese economic dynamic on the unskilled suburban working class and does so here again, although the main theme is violent acts and how their causes and affects impact on both the viictims and offenders.

The four stories interlock and there are many funny as well as moving and shocking moments.

A provocative film that underpins the Director as one of China's finest.

Run of the mill - A Touch of Sin review by DJ

The first film was very predictable and seemed to just show someone taking revenge on those who have annoyed or abused him , nothing new and nothing "deep " about it.

The next was very much the same , a story line used many times before with a , once again , a predictable bloody ending.

I did not bother viewing any more as I was preparing for more of what I had previously seen.

I honestly do not know how the other critics managed to see anything special in these stories.

I watch a lot of foreign films and I just don't think these had anything like the drama and story lines of anything I have seen before.

I would not recommend it/them

Absorbing slices of Chinese life. - A Touch of Sin review by TE

A classy film, with 4 separate stories that have only chance connections. Each tale has its own power, with a unifying theme based round the impacts of China's transition to an elitist capitalist economy.

The ever-widening gap between rich and poor is the mainspring of all 4 stories.

I can see the merits of this film and it looks stunning but the excessive violence came to feel predictable by the end. There simply wasn't enough depth to any of the characters or stories.

The film remains banned in China, despite initially being given a release date.

There are not many films that can live up to depicting violence in a very real and emotional way. Filmmakers like Tarantino and Steve McQueen make it seem easy but more often than not films will treat a drama’s violence content with a Hollywood sheen, a viewpoint that will glamourise or accentuate what is taking place for the sake of humour or shock value. A Touch of Sin attempt to give light to the reality of violence and it does an almost perfect job.

The film follows many different horrific acts taking place as it concentrates on four specific stories and the effects these events have on those involved and how they and the people around them deal with the after effects as they scramble for reason behind these acts while also attempting to find something on the other side of them.

While the film depicts the stories in an honest light it is also a decidedly foreign film as it presents characters that are hard to connect to not only because of their specific national traits but also because the script is loose and interpretation is left up to the audience leaving many a scene that falls through the cracks as they prove jarring to a regular picture. If anything A Touch of Sin reminds me of Upstream Color, a film entirely dependant on the viewers ideas and while there is a loose story here it may require some deep thought by film's end to really get the most out of it.

All in all this is rich and compelling storytelling with a twist and while it may cause a few headaches there is plenty of beauty hidden behind the violence. Although this may not be the pleasant film some may be searching for I dare you not to find yourself pondering the possibilities and ideas raised for many days to come as this is intellectual filmmaking at its finest.