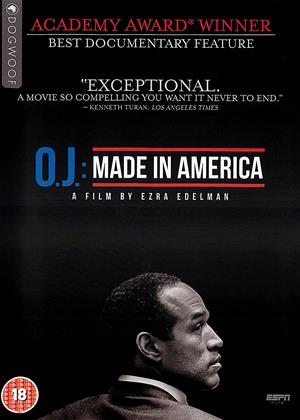 The American Nightmare - O.J.: Made in America review by Count Otto Black

This seven-and-a-half-hour documentary was made as a cinematic feature. Yes, you really are supposed to watch it all in one sitting, though you're allowed a few minutes every three hours to go to the toilet. At those cinema screenings, I bet there wasn't one person who, after enduring the whole thing, wasn't secretly thinking "Phew, I'm glad that's over!", no matter how loudly they applauded.

This is an ordeal. In particular, it takes three hours to get to the murders. So 40% of this absurdly long film is devoted to establishing that a) blacks living in Los Angeles thoroughly distrusted the justice system in general and the LAPD in particular for lots of reasons, notably the Rodney King incident, and b) OJ Simpson was very famous and popular indeed before his downfall. These facts are important to the story, but they're pretty simple, especially OJ's fame. We don't need to see him running with a football while vast crowds cheer all that many times to get the point, and what else did he do? Acted badly in a few movies, made a Hertz commercial that's shown so many times it almost seems like horribly misjudged product placement, and after that he was famous for being famous. And then he killed his wife.

Many of OJ's friends get lots and lots of screen-time, but they're not particularly interesting people, and most of them haven't really got much more to say than: "OJ is such a charismatic guy you can't help liking him, but even of course I always sort of knew there was something wrong with him." Well, in hindsight, they would say that, wouldn't they? As for the celebrities prominently listed among the cast, second-billed Muhammad Ali appears in less than a minute of barely relevant archive footage, and most of the others aren't on screen for much longer.

The peculiar allocation of screen time given to people who are both still alive and willing to talk is harder to explain. For instance, there's quite a lot of interview footage featuring the transgender person who piloted the news helicopter that followed the infamous slow-speed white Bronco chase, but Detective Mark Furhman is on screen for less time than this extremely peripheral character, even though he's arguably the most significant person in the story other than OJ himself, and there are so many questions still unanswered about him that we should have been given a much clearer idea of why he said and did certain extremely strange things.

But it's in their treatment of OJ that the film-makers make their biggest and weirdest blunder. On the third disk as an extra there's a 45-minute interview with OJ in which the presenter interrupts very little and just lets him talk. In one-tenth the duration of the documentary, we understand perfectly that OJ is an immensely vain and utterly selfish man who blames everyone except himself for everything bad he's ever done, and he has no more idea of right and wrong or consideration for other people than a cat. If he'd taken the stand in his own defense, he'd have been toast! At one point he literally compares his sufferings to those of Jesus Christ!

This documentary makes such a powerful statement about racial prejudice and social injustice, and the bizarre consequences this can have, such as a murderer going free for reasons that ultimately have nothing to do with whether or not he committed the crime, that it has to be praised on some level. But it's so repetitive that there's no justification for its excessive length, and it takes absolutely forever to make very simple points, such as: "OJ Simpson is so self-centered there must be something wrong with him", when you can get the same information from OJ's own mouth just by letting him ramble on about himself for five minutes. If a really good editor ruthlessly pruned this lumbering diplodocus of a film down to a size that fitted comfortably on one disk, they wouldn't have to lose anything that genuinely mattered. And it would be a far better film.

O.J.: Made in America review by Adrijan Arsovski - Cinema Paradiso

O.J. Made in America is a thorough, competently made 7.5 hour-long documentary which, and I don’t use this term lightly, is easily the best documentary of the 21-st century and completely captivating from its sole beginning to the very end. The funny thing is, those 7.5 hours will probably feel to you like 3 at most, which speaks volumes about the quality of the film and the impact that it’ll have on future generations. Case in point: O.J. Made in America is one of the best things you can do to spend your hard-earned time.

The film examines the trials (in a literal sense) and tribulations of one man, i.e. the titular person of O.J. Simpson. And not only that, but O.J. serves as a catalyzer of America’s shortcomings – and more importantly – always fluctuating racial politics towards the end of 20-th and the beginning of 21-st century. In fact, O.J. Made in America is one of the most complete and well-rounded documentaries in recent years – and that’s without even taking the film’s main point in consideration.

Which is the portrayal of O.J. himself. His real-life character is full with contradictions, discrepancies, and other perks that could be dubbed as “not-ideal”. Yet, O.J. Simpson’s appeal lays exactly in these character discrepancies, which would later go on to spill onto his trial (undoubtedly: the trial of the century) as well.

In addition, it’s clear that Ezra Edelman’s intentions were to make the ultimate documentary – a no small feat. To this extent, it can be also safely asserted that he succeed in his intention, since O.J. Made in America is captivating on so many levels that I forgot to count. Now, the story.

O.J. Made in America plays like a collection of several films that feature the same protagonist in several different settings. This protagonist is none other than O.J. himself, and his tale unravels through a variety of different stories that all of them somehow end up converging into a cohesive whole. Here’s a shortlist of the majority of these themes: rags-to-riches, as a poor kid from the ghetto manages to rise to the occasion and prove everyone wrong by succeeding; an uplifting and motivational sports story that leads to the ultimate win both at sports and life; then there is the story of an once flourishing relationship turned-sour; then of course, the murder mystery and the following drama in the courtroom; finally, there is a genuine and well-researched critique on the current U.S. judiciary system, which falls nicely in line with all previous mentioned themes. It’s just mesmerizing to watch how O.J. Simpson’s unique career has led to one of the most famous trials in the world. Fascinating.

Finally, O.J. Made in America is a very potent, thrilling, and downright spectacular documentary that is a simple MUST watch. Just awesome.