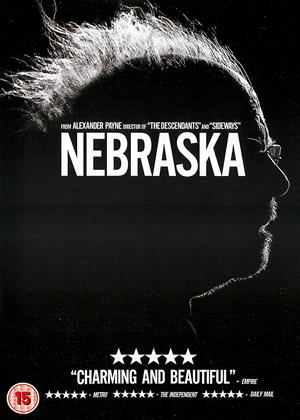 I really loved this film. The trick to its success - and it really is both genuinely funny, and very touching too - is a brilliant script which is full of circular arguments and conversations, witty ironies, and nail-on-head commentary. I laughed out loud several times.

Really good to see a film about older people that does not go all silly like the lame Dustin Hoffman directed effort Quartet, or get all huggy girly happy endings like the Marigold Hotel film (though that was OK).

At one point a woman asks if the old man has Alzheimers; 'no', says his son, 'he just believes what people tell him.' 'Too bad', says the woman. You see? Class writing!

I was also very moved by the old man's faith in his winning ticket, his chasing of dreams after an unhappy life, and the devotion shown him by his wife and sons. His wife in particular gets some great lines and is a fun character.

The minor characters are also well-drawn - Stacy Keach pops up as the baddie here, a former friend who wants his cut (and has already had one judging by the big scar on his lip - why Mr Keach PI always had a moustache, of course. Who knew?)

The black and white works well, giving a faded forgotten mid-West feel to the film; and the ending is great - if you're not cheering the old man at this point you need a heart transplant.

The best US film I have seen in a year - and not in the least depressing, but life-affirming. It should have won awards. I could watch it all over again right now.

No schmaltz, but plenty of wit & heartscalding dark humour in this one. The old fella pursuing his dream is far from cute, but unfolds & becomes more understandable as the story goes on. Great acting all round, & the mother is monstrously funny. The wide open landscape is almost a character in itself.

Sit back and enjoy - Nebraska review by BE

An unglamorous movie with an unrushed narrative, this movie is a joy to watch. It depicts yearning and regret but is interspersed with soft humour. The black and white presentation promotes its nostalgic tone. The acting throughout from all the cast and the direction is faultless. June Squibb, in her eighties, is unmissable. Thoroughly recommended.

Having lived in Lincoln Nebraska for 3 years, I thought I'd give it a go! I didn't expect much but was so glad I chose it. Bruce Dern was superb as the unhappy main character, ably supported by the rest of the cast.

I especially enjoyed the family reunion in Nebraska - so true to life and acted without showiness by the other characters. In fact, they barely moved! So true to life.

I could have done without the mawkishness at the end, but all in all I would thoroughly recommend you see this.

A thoroughly entertaining film that has wise and witty things to say about family life, growing older and relationships. No scene outstays its welcome; every scene makes its point. You can't fail to be moved, and moved to laughter, by Nebraksa.

Don't you sometimes just want to contact the writer, director, actors and whole crew of a film you've just seen, and simply thank them for the great pleasure they have just given you. That's how I feel about this film.

First rate movie. Well written and executed, the storyline is warm without ever being overplayed, the cinamatoghrapy is stunning, the black and white extenuated those big Nebraskan landscapes. I wish they would make more films like this.

Good but not sure why - Nebraska review by LB

I really enjoyed this film but I'm not sure why. The story line was believable; the acting superb and the characters realistic. The ending was brilliant but for the life of me I do not think that filming it in Black & White was a good decision. I can understand that the Director wanted to create a harsh, no nonsense atmosphere but I would have preferred colour.

Alexander Payne has been responsible for some great comedy vehicles while also managing to relate them back to everyday life and the various things we find ourselves obsessing over. This time around it is our relationships with our parents, how we both know too much and not enough about a person at the same time and how that can cloud the true nature of the person you claim to know.

Nebraska follows Woody Grant (Bruce Dern), a man who believes he has won a million dollars from a magazine subscription company. When he starts walking to Nebraska to collect his ‘winnings’ he is stopped by his family but his son David (Will Forte) decides to drive him across country as a way of reconnecting with his always distant father. Along the way they find themselves in Woody’s hometown and must contend with Woody’s old friends and family, each of whom wants to take a piece out of the now ‘rich’ man.

Payne has always been able to find the inherent comedy in ordinary people doing horrible things and Nebraska is no different, be it family members manipulating Woody, the drunks at the local tavern doing much the same or his children failing to see the real him and punishing him for it. Watching these people take desperate steps to claw to the faux life raft Woody seems to represent.

While his previous feature, The Descendants dealt with a man born into money and prestige, Nebraska deals with the destruction of the small farming town and the desperation that comes with it. While everyone is out to get Woody he can’t help but try to help those around him because that is who he is as a person. A quietly generous soul, Dern makes Woody a tragic yet lovable man wounded from his past but resolved to not let it affect those around him. It’s a powerhouse performance well worth watching for.

Forte manages to elicit a few laughs but is stuck in a role reserved for character development and plot mostly, an unfortunate side effect of the films story. Overall however it is a film rich with subtext and hidden joys and while it doesn’t live up to Payne’s previous efforts it still evokative work worthy of watching, if only for Dern