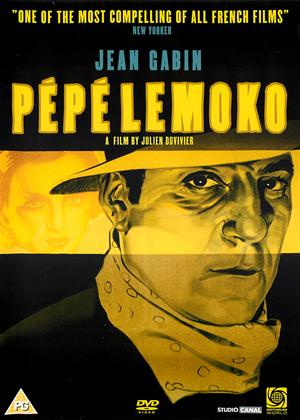 Some classic films stand the test of time better than others. This is one of those that unfortunately doesn't. The Casbah of Algiers is an odd location for a film noir, being all whitewash and blazing sunlight, and from the viewpoint of today's increasingly multicultural society, it doesn't seem anything like as exotic as it must have to French audiences in 1937. In fact, the movie's main plot-hook, that enforced exile in an "alien" country completely unlike France is literally a fate worse than death for a true Frenchman, nowadays comes across as slightly racist, as does the one-dimensional cliché fiery gypsy girl whose blazing animal passions are no substitute for the love of a civilized French woman.

Of course, you have to make allowances when you're watching a movie almost 80 years old. But the film has other flaws too, notably that very little actually happens. Pépé mopes, romances his new love, and mopes some more. The central performances, especially Jean Gabin's, are excellent, but there's still way too much moping. A proper film noir needs a fair bit of action, and this is sadly lacking. The shootout near the beginning is anticlimactic, staged so poorly that it's downright desultory, and has no consequences at all; even worse, the only gunfight that really matters takes place entirely offscreen. And there's that scene where Pépé and his gang plan a robbery which sounds as though it'll be rather exciting, but never actually carry it out, or even mention it ever again. Apart from one genuinely noir-ish scene featuring a couple of quite nasty deaths, it's completely lacking in both violent action and true darkness, and the protagonist's eventual fate makes him seem not so much tragic as just a bit of a wuss.

On the plus side, there's the acting, which is mostly very good, and some extremely interesting characterisation, notably the utterly unsympathetic slimy little creep of a policeman who, though technically in the right because he's trying to arrest a gang of armed robbers who are undoubtedly guilty, uses the dirtiest tactics imaginable, and by cynically exploiting everything that's still good about these bad men, ultimately comes across as far worse than they are. But Saturnin Fabre is no Orson Welles, and this is no "Touch Of Evil". And in terms of essentially good characters who do bad things and are undone by their human weakness and basic decency, this isn't a patch on "Rififi". By the way, given his amazing performance in "L'Age d'Or", it's a shame they couldn't think of anything better to do with Surrealist icon Gaston Modot than have him lurk on the sidelines looking slightly retarded. As classics go, a very minor one.

That phrase is Graham Greene's, from his 1937 review of Pépé le Moko to describe a woman (Mireille Balin) who has been drawn to a man for his money but on their arrival in Algiers chances into the Casbah, where she becomes in thrall to a hoodlum (Jean Gabin) who cannot leave those tight and twisted streets, those plentiful nooks, as he will be picked up by the police for his part in a Parisian heist.

Gabin already has a woman (Line Noro) who has much with which to put up, such is the violence of his hands and mouth, but he becomes smitten by Mireille Balin, who in Greene's full phrase, is “acquisitive, prehensile, risen from the ranks, and groomed for chromium concubinage”. Equally, she looks set to change (something which Greene said elsewhere is the hardest thing for a writer to describe).

Greene called this film - adapted by Henri La Bathe from his novel with its director Julien Duvivier - “one of the most exciting and moving films I can remember seeing”. What's more, as Gabin succumbs to fatal allure, “we do not forget the real subject in a mass of detail: the freedom-loving human spirit trapped and pulled at the chain. A simple subject, but fiction does not demand complex themes, and the story of a man at liberty to move only in one shabby, alien quarter when his heart is another place widens out to touch the experience of exile common to everyone”.

That should surely inspire you to read all of Greene's film writings (collected in Mornings in the Dark). What's more, some have suggested that all this - along with a police go-between - may have suggested to him some of the plot of The Third Man. And one could add that the treatment handed out to the hapless informer amidst Gabin's gang inspired some of Brighton Rock, on which Greene was working at that time.

There is so much more to be said about Pépé le moko, not least that its cinematography is as much a character as that in The Third Man - and that its ending is as heartbreaking as the one upon which Carol Reed insisted for Greene's script, and indeed the one eventually chosen for the on-the-hoof making of Casablanca.

And, of course, those British and American films turn around music - as does Pépé le moko: quite a moment when now-swollen Fréhel puts a 78 on the turntable and listens to her youthful voice emerge from the horn. That is something at which a modern-day actor might balk. One can only admire Fréher for doing so - and seek out more of her discs.