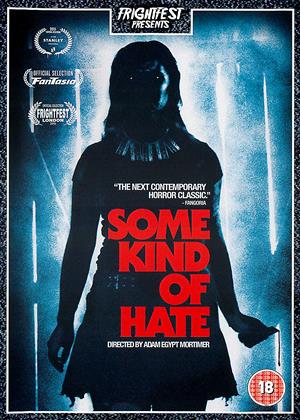 Reviews (1) of Some Kind of Hate

Bullied teen Lincoln Taggert (Ronen Rubinstein), provoked, attacks his aggressor. Unfairly, Taggert is then sent to an isolated reform school. Bizarrely, the school has no security whatsoever, so the others constantly test him and the victimization continues.

Let’s get this out of the way. This is designer, smooth, emo bullying. Either you’re ‘f**king retarded’ (bad), or ‘pretty gangster’ (good). Lincoln is textbook cool – hair faultlessly dyed throughout and worn long, growls, talks about ‘losing his s**t’, well-built, smokes, good-looking. Just imagine if he was really needy, found communication difficult, was socially inept instead of ‘can’t be bothered’, wore glasses, stuttered, suffered from acne? Just imagine if he was in any way sympathetic? Well, he’s not. He’s a practised outcast. He doesn’t belong to the cool kids, but has his ‘uniform’ of goth to play out – just a different level of cool. The others who have been sent to the reform school are equally perfect – not outcasts at all. The girls ooze confident sex appeal, the boys respond in kind. Any hope of a realistic study of – or even a passing resemblance to – real bullying is not wanted here. Bratty kids, dealing with s**t.

Right, with that major irritation out of the way – Lincoln soon finds solace in the arms of the most perfect of the pretty girls (Kaitlin, played by Grace Phipps) at this catwalk institution. Cigarette hanging loosely from his lips, he stares meaningfully as she smoulders in the sunshine. Cue death metal soundtrack …

Why do many of these films seem to think it is frightening to have someone – usually young and female – stare at you wide-eyed and declare, “You’re gona die,” accompanied by a sharp sting of music? It is as ineffectual here is ever. The ghostly apparition of a former bullied inmate promises Lincoln “No-one’s gonna f**k with us,” in a scratchy voice, which reduces any demonic effect she may have and reduces her to the level of the rest of the pack.

Things do briefly improve, however. On this bubble-gum canvas of what a reform school is like, there’s no doubt that however one-dimensional Lincoln is, his detracters are on a different level. It is pleasant to see them finally brought down in some fairly decent gory set-pieces.

That said, this is really just another fau-angsty teen slasher film that you’ve seen many times before. It feeds the dissatisfied youth experience and hope they don’t grow out of it before the 82 minutes is up. It is full of enough expletives to make the parents frown. I thought it would pick up – Adam Egypt Mortimer’s directorial values are fine without ever being innovative – and it did towards the end. I imagine this is designed for a certain audience, and perhaps they will enjoy it.