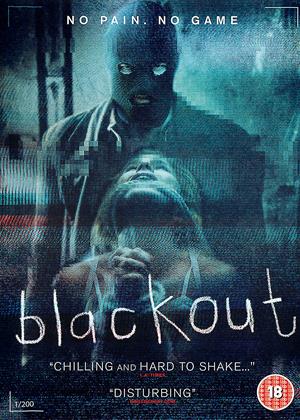 Synopsis:
The most extreme immersive horror experience in America is called 'Blackout'. Not for the faint-hearted, it is a terrifying, psycho-sexual thrill ride designed to play on our deepest psychological fears. This documentary follows a group of friends whose experience with Blackout becomes deeply personal, developing into an obsession that hijacks their lives ana blurs the line between reality and paranoid fantasy.
Actors:
Andrew Gallagher, Allison Fogarty, Bob Glouberman, Abel Horwitz, Jessica Sowa
Directors:
Rich Fox
Producers:
Kris Curry
Aka:
The Blackout Experiments
Studio:
Precision Pictures
Genres:
Documentary, Horror

The Blackout Experiments is a psychological documentary horror flick (yes, you read that right) that shows off extremely sado-masochistic tendencies toward its victims who in turn, singed up voluntarily for the Blackout experience. To describe Blackout is to compare it with David Fincher’s The Game, only slightly more absurd and extremely more “rewarding” for its participants, or so they claim. But, amidst all that rubble and chaos Rich Fox wants the audience to believe something deeply sinister is unraveling - The Blackout Experiments are more shouting and rapid edits than a manifestation of psychological shortcomings turned-horror.

The film follows a group of wannabe thrill-seekers who sign up for a mysterious, personally-tailored experience dubbed as the ‘Blackout’. Then, as they proceed with their lives, their routine is disrupted in a bizarre manner whilst their whereabouts are dragged into a store and their bodies undergo a borderline insane exercise in perseverance, as several cosplayed people shout and do stuff above their fragile heads.

And guess what: turns out – according to the volunteers, the masochistic experience was revelatory, cathartic and it shed light on things they never thought possible before. Problem is, when finally interviewed in front of journalistic cameras: they can barely describe what that “thing” is supposed to represent.

Is The Blackout Experiments much ado about nothing? Perhaps. But maybe, just maybe there is more than meets the eye. Sure it’s kinky and perverted, but what about – horrifying? Russell thinks so. And also he seems to enjoy it more than your typical craiglist volunteer for that matter (albeit he signed a waiver before singing the ‘hell verse’).

For all its guts and glory, the guys behind The Blackout Experiments don’t reveal too much of their secret ingredient, which makes the ordeal all that stupefying. Rather, the documentary closely puts the participants under unnerving scrutiny that hides more than it reveals. It’s like these like-minded folk found a new thrill in their boring, urban, everyday lives.

Or they’re just as demented as the producers at Fox putting Blackout together.

Nevertheless, one thing is certain: The Blackout Experiments feels (kind of) new, and (kinda) disturbing in its own indie way. It’s like Saw, but without the murders, and ten times the intrigue and mystery. Or even resembling The Game, only more hardcore and less smart.

The Blackout Experiments is weirdly satisfying (there I said it), not because one enjoys in the pain of others (although that counts also) – but because it strikes a chord in places one didn’t enjoyed having been struck before, if that makes any sense whatsoever.