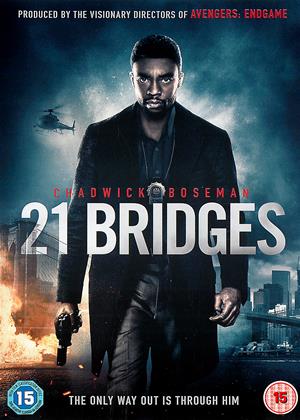 A cool detective chases a resourceful baddie through the Manhattan night. Eight cops are dead and that’s just the start. There’s no mismatched buddie nonsense, no stupid cops, no idiot baddies who can’t shoot straight, no bulletproof heroes, no love interest, no subplots. This is a straight-down-the-line intelligent action thriller directed with gusto by Irishman Brian Kirk, upping his game after work on TV series such as Luther and Game of Thrones. The two leads (Chadwick Bozeman, summoning his inner Denzel, and Stephan James) ooze charisma. Sienna Miller shows she should be an action star. Henry Jackman’s pulsating score echoes Bernard Hermann’s work for Hitchcock.

To delve deeper, listen to the director’s commentary on the DVD and learn how some scenes had to be shot by a parkour runner using a warp cam. Great stuff. It’s the best cop film since Den of Thieves.

This isn't a great film. It feels very sub standard. The storyline plods and the actors look bored most of the time. Maybe one for a rainy day.

This is quite a simple little thriller which probably wouldn't be a big release without Chadwick Boseman in the lead role. He is very good, as usual, and it is a shame they decided to spend so much time on a convoluted sub plot rather than his investigation into the shootout. The scenes with Sienna Miller and JK Simmons are really good and they could have done with more of that.

This is a very exciting film, with well done, if rather bloody, action sequences. Boseman is excellent as the seasoned detective investigating corruption in New York's police department, who doesn't know who to trust, if anybody!

Oversimplified yet muddled cop thriller that badly wants to be an action film. Swapping conversation for endless gun battles, 21 Bridges doesn't short change on the set-pieces, however, it's a bit empty above the neck. A muddled plot which champions the hard working ethics of the police, yet presents 9 out of 10 as corrupt drug dealers is a hard sell. Well acted, the script is largely cornball, and Chadwick Boseman (in the lead role) struggles to convince here, whereas he's pretty much owned every other role I've seen him in (42, Get On Up, Black Panther). It's alright but this makes Den of Thieves look like Heat.

It’s not the least bit surprising that the marketing for 21 Bridges has leaned in hard to its ties with the Marvel Cinematic Universe. It stars Chadwick Boseman, the Black Panther, a mantle that has apparently been smeared across his lesser direct-to-video movies. It was produced by Anthony and Joe Russo, the brothers behind two Avengers movies and you better believe those credits are plastered onto the trailer. What would be surprising is if 21 Bridges was a genuine surprise of a cop drama. Not this time. But, hey, they got the Avengers folks!

New York City currently has some cop killers (Stephan James and Taylor Kitsch) that need to be brought in. Tasked with this manhunt is NYPD detective Andre Davis (Boseman) who tries to devise the best means of bringing in these suspected killers. His grand plan is to effectively shut down all 21 bridges going out of Manhattan and trap the killers with what he boldly describes as a wave of blue. Manhattan thus becomes a very scary place as cops flood the streets and the killers find themselves concerned in one tense chase after another. Of course, as Davis progresses with his case, he may find himself torn about who to trust in a conspiracy that is brewing within the city.

Davis’ discovery of the truth behind the murders laced with a conspiracy of drug trafficking takes on a standard thriller aspect. While the film does call into question the cops that are swarming across Manhattan, it only does so through a seemingly daunting system of the true villains being just a few bad cops. Of course, Davis questions his superiors given his tragic childhood of his cop father being gunned down. He’ll naturally be considered the man for the job, blindly devoted to taking down cop killers without question, but he grows to ask important questions.

What’s most frustrating about this structure is that it ultimately boils up to a whole lot of nothing and merely doing the right thing when you recognize the true antagonists of a corrupt system of policing. It is perhaps the safest route to take, never questioning where to go when corruption is discovered in its walls; the act of digging it up is portrayed as noble enough. After all, the film is far more concerned with the actions around corruption and not so much how it will be tackled.

And on that level, 21 Bridges is...sufficient? Most of the actors, including a reliable J.K. Simmons, deliver decent performances of New York cops and desperate fugitives. The chases and shootouts are capable enough to be stirring if not ever offering more than lukewarm staging. It’s a picture that paints by the numbers, trying its hardest to make that watery blue a little darker for that police procedural grit. Try as it might, 21 Bridges is doomed to get drowned and forgotten in the big bin of police dramas that offer little more than action that will entertain for a few minutes and leave the mind shortly.