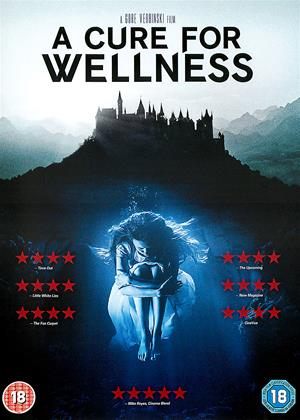 Reviews (5) of A Cure for Wellness

Get on with it! - A Cure for Wellness review by CP Customer

An absolutely gorgeously filmed piece of work from Verbinski, and a definite atmosphere of unease built, but on the downside it's around an hour too long. The climax, which should draw everything that's happened together instead drops some carefully developed plot points, doesn't make complete sense and turns many of the previous events into an elaborate red herring. More skilled directors might have kept it taut, cut away some of the fat and focused on that impending sense of dread, but this is Verbinski, lord of the overlong epic, and you could very easily argue that the end does not come anywhere close to justifying the commitment made by you, the viewer, in getting to that stage. it isn't without interest, though, and it's a decent vehicle for Dane DeHaan, who looks far more at home here than he did in VALERIAN.

Spoilers follow ... - A Cure for Wellness review by NP

Can you have too much atmosphere? I ask this because I love films that transport the viewer to the fictional world of the production, incite you to shudder at each shadow, marvel at each misty dawn, gasp at the scale of the architecture and actually encourage you to feel you are part of the experience. The very stylish and sublime Swiss rehabilitation centre featured here is extremely scenic and beautiful but at 2 hrs 26 minutes long, your fascination with the mysterious healing base is stretched out too thinly.

Dane DeHaan stars as Lockhart, a character who is, at least initially, difficult to like. Strictly a businessman, an ambitious go-getter, someone whose personality is comprised of spreadsheets and business projections, and who is never out of his shirt and tie, he represents the cogs of industry and is surrounded by, manipulated by and obeys the rules of others just like him. Their mission is purely to ‘get ahead’, to make money, and when he is sent to the mysterious centre of wellness to locate and bring back the man he replaced - Roland Pembroke (Harry Groener) - he considers it a waste of his talents. To balance things, the money he earns helps keep his aged mother in the best care home he can afford. DeHaan plays the role exceptionally well, his ambition slowly being eroded, displaying a semblance of humanity beneath - a nice balance to the apparently benevolent Doctor Volmer (Jason Isaacs), whose ‘journey’ heads in the opposite direction.

For such a driven character, it is ironic that when he is *being* driven to the centre, a mishap with a deer causes a crash that sends him there as a patient. Once there, he experiences the unorthodox, somewhat HP Lovecraft-ian techniques of healing the patients of their alleged maladies. That Lockhart is so arrogant in the face of the peacefulness of the doctors and inmates ensures the audience is far from on his side. Also, the reason The Company need Pembroke back is so they can pin various illegal business activities on him.

The finale is a terrific spectacle of Grand Guignol, with the reason finally revealed for all the atrocities committed. The closing scenes are lovingly crafted by Director and Producer Gore Verbinski. It is just possible Verbinski is too in love with the project, for there is no reason it should last 146 minutes. Possibly this is a major factor why the film failed at the box office. The fact that audience attention is allowed to wander on occasion is a huge shame, as intricate and meticulous scenes will be passed over.

The ending (SPOILER) is satisfying, with Lockhart rejecting both the wellness ‘clinic’ and his former life as a business drone.

Not such a long experience. - A Cure for Wellness review by KC

I was completely caught up in this film and subsequently I didn't find it overlong at all. The sense of menace and dread kept me on the edge of the settee as the plot unfolded and the cinematography rendered the world of the sanatorium in a grim palate of colors that captured the essence of institutionalised decay that reeked of suspended putrefaction. So yeah I enjoyed it and would definitely avoid health spas in the future.

A cure for weirdness more like! - A Cure for Wellness review by TB

This film can only be described as ‘Hostel’ meets ‘Harry Potter’. A very strange film with great atmospherics and it keeps you interested enough to want to know what’s going on but ultimately it’s all a bit of a letdown. Was left feeling I’d wasted just over two hours of my life on something that could have been much shorter in length. Not my favourite genre/type of film, so others may find it more appealing.

Too long!! - A Cure for Wellness review by TR

Too long by far! Cut the length by half at least and it would have been much better. The story would better fit into an episode of "The Twilight Zone." Instead, it resembles an interminable vanity-project...with dodgy CGI to boot.