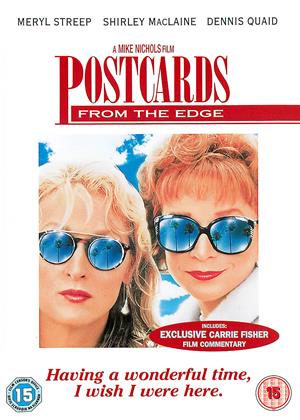 Reviews (2) of Postcards from the Edge

A mixed success - Postcards from the Edge review by JB

Penned by the late, great Carrie Fisher based on her own semi-autobiographical novel, Postcards from the Edge should have been better.

Meryl Streep plays a version of Fisher - a Hollywood star dealing with drug addiction whilst trying to maintain an on-screen career. She has a close but problematic relationship with her mother (Shirley MacLaine) - viewers might find parallels here with the relationship between Fisher and her famous mother, Debbie Reynolds. There's a dodgy boyfriend on the scene, too (Dennis Quaid), who exploits and enables her in equal measure. It all comes to a head where she's checked into a rehab unit following an overdose.

Although the script has plenty of good jokes and Mike Nichols direction plenty of fun touches (particularly visual gags about life on a film set), it feels all a bit inconsequential. For me, there's two big problems. Firstly, Meryl Streep feels a little too earnest or studied, and too squeaky clean to play this role. Secondly, the film has plenty of dark material but focuses on the jokes and in-jokes rather than engage fully with its themes of addiction, mental illness and being a woman in Hollywood. There's a bit on the mother-daughter conflict but even that seems rather evasive.

So although not without its moments, this is a rather thin and superficial film, not helped by a miscast central performance.

Okay - Postcards from the Edge review by MP

Not quite what i thought it would be.

Seemed more like a skit than a real life story.

Scarce on drama line, but good acting by Streep and Maclaine. I think it was more a vehicle to show off the two stars though. If the singing was done by Meryl Streep, then i am impressed.

Cannot imagine why Gene Hackman did such a cameo.

It passes time if you are bored one afternoon and have nothing else to do.