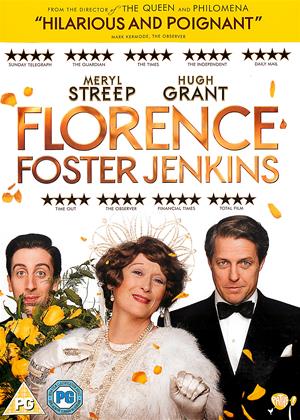 OK, so this movie is not groundbeaking - well, biopics tend not to be. They are easy meat for the studios as are adaptations of video games and cartoons, and remakes of old films or sequels, or filmed books. But then most movies from the risk-averse studios fit into one of these categories.

As a simple biopic of a woman who was probably off her rocker, this is great fun. I loved the pianist character - so true to life, when I compare with several camp classical pianists I have known. I'd award him the best supporting actor Oscar right now.

Hugh Grant redeems himself and has a career comeback with this too. I often find La Streep irritating, but she ticks all the boxes here - and it is VERY hard indeed to deliberately sing or play a musical instrument flat. Les Dawson was the master. But for singing, Streep is spot on.

Great fun and a fascinating story of a one-off woman - I suppose she was maybe the Jade Goody of her age time ten. Never forget however that Florence was super rich and people like that can do ANYTHING they want in the arts - I could name several writers, actors, film makers and performers who owe their entire careers to the fact they're from a rich background. Money trumps talent every time.

4.5 stars rounded up to 5. The notes at the end of what happened to these people are fascinating and they play an actual recording of Florence Foster Jenkins at the end too so we can all hear how bad she truly was! Btw the same thing happens these days with Russian Oligarchs investing millions into trying to make their talentless young wives pop stars. Plus ca change...

This topic has been done before, but brought up to date now. Hugh always plays a bit of dodgy lad with ladies, and part suits him well. Meryl is once more on form, and the pianist Simon Helberg is totally spot on. Good casting of someone have not consciously seen before.

Could not write the story and get away with it, so just as well is based pretty much on fact, although in fact she was never married to Bayfield.

One of the few decent films released recently

When I first sat down to watch this film I was unsure what was going on and unusually, didn't watch more than half of it. When a friend told me to persevere with it as all would be revealed towards the end I did watch it right through, but I didn't find any real explanation, other than that Florence was rich woman with no talent who believed that she could sing! Nobody appeared to want to disabuse her of this idea!

However, being a true story, one has to accept this and thereafter I enjoyed the performances of the actors. They were all brilliant! It's an unusual part for Hugh Grant and he plays it very well indeed! The pianist, played by Simon Helberg, was amazing and I was stunned to discover that the playing was all his own! David Haig was excellent as Florence's voice coach, but the star in every way is Meryl Streep, admittedly my favourite actress. It was easy to forget that it was indeed her, her singing was so bad!

Overall I would recommend it and even if the story is rather odd, enjoy the acting! And also try to imagine how on earth it's filmed in Liverpool, masquerading as New York!