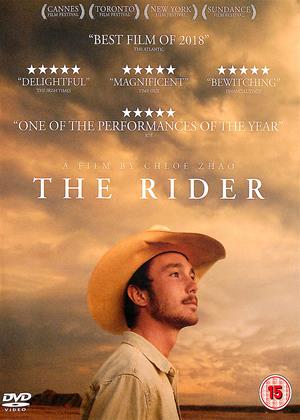 Reviews (9) of The Rider

This is a beautiful, languid drama about a young rodeo rider who has a serious head injury. The doctors tell him that he should never ride again, but it is his life. So will he/won't he take the risk? The film takes you deeply into his life with his feckless father, sister with Asperger's and his rodeo friends. You can't help but get emotionally involved with them. The cinematography of the wide open spaces and horses is terrific.

I knew little about this film, but I noticed watching the credits at the end that most of the main actors were playing themselves. So it turns out that they are non-actors playing themselves in what is mostly a true story. A beautiful film - we loved it, and it sticks in the memory for some time.

Truly original charmer of a film! - The Rider review by TE

Captivating mix of documentary and fiction, full of beautiful cinematogaphy.

For once it is well worth watching the dvd extras and the candid interview with Brady Jandreau, the subject of the film and a real 'natural' star.

The family setting, the bond between the young devotees of rodeo riding, and the rodeo scenes themselves all contribute to an excellent surprise of a film.

Beautiful exploration of loss - The Rider review by RF

Beautifully filmed exploration of loss - cinematography was stunning and the acting by the characters (who played themselves) was incredible. this will stick in the memory for a long time. Not fast-moving, but worth the time it takes to unfold. Can't rate it highly enough.

Beautiful and sad. - The Rider review by DS

Director Chloe Zhao making the film over a short time period on a tight budget uses amateurs and non-actors throughout the film with Brady Jandreau and his family playing celluloid versions of themselves right down to the brain injury the real Brady suffered being part of this film’s narrative.

The story is slight, should a rodeo rider, who lives to ride horses, return to the rodeo after suffering an injury so serious he could die if he does? How will his future shape out when the only thing he wanted to do was be a rodeo rider and train horses? That's it.

What Zhao has created the is slow languid mood piece here with beautiful lingering shots of the vast, spacious Badlands of Dakota being a character in itself.

With the actors being non-professionals there is now demonstrative histrionics that might be associated with this type of story, even the conflict scenes play out gently, flaring up and dying down very quickly. Some people will love this, others will find it boring. For me, it reminded me more of the long, torpid, films of the 1970s that I used to like, character studies with the story playing out slowly and leisurely in front of you and a final lingering shot pay-off. That's what you get here.

The questions it asks are myriad it will be each individual’s viewpoint on what they are. The death of the way of the life of the cowboy in the USA, is he just a rodeo entertainer and nothing else? If you have only one goal in your life how does affect you and everyone around you when your circumstances change beyond your control? Could it be about the indomitable human spirit to never give up, to keep going or is it really foolishness? The end of the American Dream? Who knows? But underneath it all there is the tough, never-say-die, spirit that we non-Americans believe is at the heart of the USA for all of its faults and quirks. You can't help but admire these jeans and horses people living in a vast desolate place that have seen their way of life erode over the generates with seemingly no help or support from anywhere else.

It is a beautiful vision of a film with some of the most evocative and genuinely sad scenes I've seen for some time.

Needless to say, the cinematography is beautiful and spectacular the acting heart-breaking, natural and almost documentary style in the delivery, and it shows me a world I have no real knowledge of prior to watching the film.

Brilliant! - The Rider review by JH

Loved it. Refreshingly real and gritty reflection on the real lives of cowboys without the usual Hollywood PC nonsense

My husband fell asleep - The Rider review by CM

My husband and I watch together and we have realised that quite a good test of a film is if he manages to stay awake. Well in this I am afraid he didn’t. So I was alone while watching and I didn’t hate if nor did I love it. I think it was a little sentimental, and in my opinion that detracts from it. The visits to his friend, although admirable in that of course he should visit, were there to make us cry, but I did not. The scenes of horse training were quite interesting.

On the fence - The Rider review by BE

I felt I should have enjoyed this movie more than I did. To start with, I could not access the subtitles so missed a lot of the dialogue through really slurred male American accents. It was also nigh on impossible to lip read as along with slurring comes depleted lip movements. I understand the lead was untrained in acting and was indeed very natural, as we're the rest of the cast and appropriate for this laconic and morose movie. The landscape and lighting were a joy to behold but apart from that, it really did not enthrall me.  There were also a couple of distressing scenes involving animals which never fail to upset me.

Hired the Film due to the fantastic response on rotten tomatoes but I have to say I found it slow and a little lacklustre.

I lived for 2 years in a poor part of sub-Saharan Africa and I felt I understood and had more in common with the lives and world-view of the people there than the world depicted in this film - which seems truly alien to a middle-class, middle-England wage-slave like me. Nevertheless, it is a moving insight into a sub-culture within a sub-culture in one small corner of the United States which, at the same time, manages to be a meditation on moving on when life delivers you the hardest of knocks, a portrait of a loving relationship between a flawed father and a damaged son, an illumination of how inappropriate the term "learning difficulties" is for people who have so much to teach, and a cinematically beautiful portrait of the American landscape. The charisma and charm of the leading actor are built on his empathy with animals, his mixture of steely determination to persevere and his personal warmth - both with his young sister and his injured friend. All this without, I felt, an ounce of false sentimentality or over-hyped emotion. If the word "authentic" means anything, this is it